Dodgers turn out the lights at Wrigley, 8-5 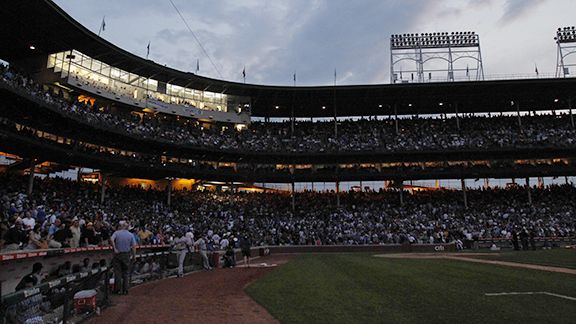 Gosh, there are just so many jokes you can make about a power outage at a baseball game, I really don’t know which one to pick. It’s like Cyrano offering multiple choices for the right nose hose. But the Dodgers were just happy to get the last laugh tonight with an 8-5 victory over the Cubs.

This was a weird one from the start for the strike-minded Chad Billingsley, who faced 11 batters in the first two innings but threw only 28 pitches in the process, allowing one run. In the third inning, a Rafael Furcal error (his third in two games) on a potential double-play grounded forced Billingsley into extended dance mode. A bases-loaded hit batter cut the Dodgers’ lead to 5-2, but Billingsley got out the final two batters of the inning to escape further damage.

Then in the fourth, with Billingsley due up, this became the night the lights went out in Georgia – er, Chicago.  The 18-minute delay, combined with the extra work from the Furcal inning, seemed likely to hasten Billingsley’s exit from the game, though he did face only one batter over the minimum in the bottom of the fourth and fifth innings. But in the sixth, after the Dodgers built their lead up to 7-2, Billingsley was pulled after allowing a one-out homer to Xavier Nady and a single to Kosuke Fukudome. He finished the night charged with two earned runs on a career-high 10 hits but only one walk, while striking out six. It wasn’t his best performance in recent weeks, but hard to be too critical considering all the mummenschanz. He faced 28 batters and was charged with 30 balls out of the strike zone.

Billingsley, for those who care about such things, is quietly on pace for a 21-win season. He has a 2.51 ERA in seven starts dating back to April 20.

Reliever Ronald Belisario induced a double play to end the sixth but was charged with two runs in the seventh. Those came thanks in part to two hits to left (an Alfonso Soriano double off Belisario, a two-run Jeff Baker triple off Hong-Chih Kuo) that would have been caught by a better left fielder than Manny Ramirez, who continues to look worse in the outfield since he returned from the disabled list than he ever has as a Dodger. Instead, even though Kuo struck out the side, the Dodger lead was cut to 7-5.

Jonathan Broxton, rested since Saturday, appeared with one out in the eighth and a runner on first and induced the Cubs to hit into their third double play of the night (not counting, obviously, the one Furcal didn’t get). Broxton then retired the side in order in the ninth for the sixth five-out save of his career.

Six different Dodgers drove in runs, including James Loney, who singled, doubled and tripled. Casey Blake drove in the Dodgers’ first run with a double and their last run with a solo homer that enabled Loney to get a chance to hit for the cycle. Loney flied to medium left field.

And so the Dodgers avoided hitting a mini-swoon, ending their two-game losing streak. Early game on Thursday: lights or no lights.