To avoid leaving Los Angeles Magazine completely in the lurch, I’ve posted a piece on the Dodgers at their CityThink blog.  The picture to the right is relevant.

‘There’s a Place in the World for a Gambler’

Been listening to this song a lot lately for some reason. It was in the movie “FM,” which featured one of the great soundtracks of all time, and also played frequently on guitar at my summer camp. And then, until this month, I probably went about 30 years or more without hearing it.

Dan Fogelberg was getting made fun of a bit by the time the 1980s were in full swing, but he did have some sweet songs. Another favorite of mine is “Same Old Lang Syne.”

I offer no defense for the corny visuals above, however.

If anyone still wants to hang out and chat in the comments, feel free … It’s a complete coincidence that this post comes on the 10th anniversary of the last post before my one and only Dodger Thoughts sabbatical. That began four days before my daughter was born, and wasn’t by design as much as it was just a byproduct of feeling overwhelmed by a dramatic life change and wanting to make sure I had my priorities straight. I had only put three months into the site at that point, drawing but a handful of readers, and it wasn’t clear that I was actually giving up anything meaningful.

Tonight, I’m more clear on what I’m putting aside – including a dream of doing Dodger Thoughts for 50 years or more. To this day, I still have enough arrogance about myself to be surprised that no one has ever wanted to pay me a living wage to do this full-time. But the marketplace spoke, and unless it changes its mind someday, I don’t have the luxury of ignoring it. And I’m tired of doing mediocre work on something that meant so much to me.

Anyone reading this site knows how hard it has been for me to maintain a pretense that the site is still useful in 2012. There have been some decent moments, but mostly, it’s been painful. And it’s not getting any easier. My family and my day job demand bigger and bigger shares of my energy and my sanity. So let’s cut to the chase: I’m designating myself for assignment.

That doesn’t mean I’m never going to post here again – in fact, I can almost promise that I will at some point – but it does mean I’m releasing myself from the daily task of writing about the Dodgers, as well as creating chat threads for every game. Dodger Thoughts has become a burden – the opposite of what it was intended to be – and there are too many other sites that now do what I set out to do more productively. The fact that I’m cutting and running with only two weeks left in the regular season (and a Dodger playoff appearance still very much a possibility) indicates just how much of a burden it has been. For all their problems, I believe in the Dodgers much more right now than I believe in my capacity to write about them.  That about says it all.

For those who remain interested in my writing independent of the Dodgers, I encourage you to visit my Variety blog, The Vote.  I know the subject matter differs like apples and asparagus, but by focusing my blogging energy there, I hope to invest it with more of the life that Dodger Thoughts once had – and maybe draw in some non-hardcore fans in the process. (The comment section there is begging for a community.) Also, please follow me on Twitter, which will be the best way to keep up on what I’m keeping up on and the quickest way to find out if and when I post on Dodger Thoughts again.

Anyone who ever was a reader or a part of the Dodger Thoughts community, and especially those who provided critical support along the way, I can’t thank you enough. I really can’t. This has been the most memorable writing experience of my life.

But this message has already gone on too long.  Here’s hoping the Dodgers come back and make me feel stupid for folding at this moment. (And here’s wishing, as Bob Timmermann suggested in an e-mail, that I had just thought to explain all this as a figment of Tommy Westphall’s autistic imagination.)

Oh – one thing I already forgot to mention. A revised version of 100 Things Dodger Fans Should Know and Do Before They Die is scheduled for publication next spring. Orlando Hudson’s cycle and other treats from the past three years will be included in the second edition.

A forever toast to the Toaster

Baseball Toaster chief Ken Arneson has returned to regular blogging. He explains his mission here. There’s probably no better blog to check out at this time.

At the same time, it’s hard not to love all the different tastes that Alex Belth has been bringing to Bronx Banter, or be thrilled that Bob Timmermann has been posting at the Portable Griddle, or savor every post by Josh Wilker at Cardboard Gods.

I feel we did everything we could to keep Baseball Toaster alive. I don’t regret our efforts, just that they didn’t succeed.

It’s been four plus two years since the 4 + 1 game. Here’s the reminiscence I wrote a year ago: 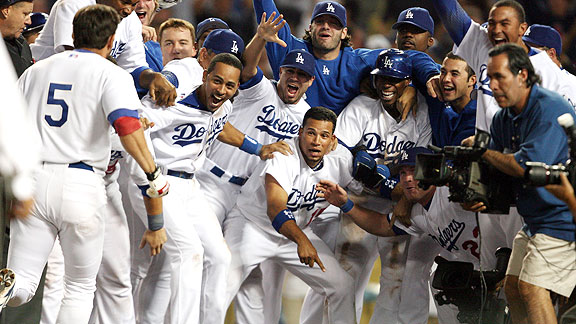 END_OF_DOCUMENT_TOKEN_TO_BE_REPLACED

Today, Clayton Kershaw was examined by Dr. Bryan Kelly at Hospital for Special Surgery in New York. Dr. Kelly is one of the premier hip specialists in the country and agreed with Dr. ElAttrache’s opinion that Clayton has an impingement of the right hip. (This is when the joint is pinched during rotation of the hip while pitching) Dr. Kelly feels that Clayton can continue to pitch if pain allows without doing further damage to his hip. However, Clayton will not be allowed to pitch if he continues to have hip pain. He will re-start his throwing program today.

We will continue the process of seeking other hip specialist’s opinions and have already sent his MRI’s and other tests to those doctors for their opinions.

Kershaw not hip to health

WIth the news from Dylan Hernandez of the Times that hip surgery might keep Clayton Kershaw sidelined for the start of the 2013, I’m wondering if the problem arose from Kershaw compensating for his plantar fasciitis.

Stephen Fife is starting for the Dodgers today in place of Clayton Kershaw. If he pitches well, he might keep starting. There is also talk of the Dodgers using a four-man rotation for the stretch run, though that would mean some guys going on three days’ rest.

Anyway, given the possibility that Fife might not stick in the rotation, leaving only Josh Beckett, Joe Blanton, Aaron Harang and Chris Capuano, I was wondering what the Dodgers’ record is for most consecutive starts by a non-homegrown player. That is your research assignment for the day …

How we feelin’ now?

Two runs with two out in the bottom of the ninth  – on hits by Andre Ethier, Luis Cruz and Juan Rivera – win it for the Dodgers, who are now tied for the second wild-card spot with St. Louis.

Incredibly, however, the Dodgers might be moving forward without their top three starting pitchers, now that Clayton Kershaw is sidelined indefinitely with a hip injury. And Matt Kemp is walking wounded as well, though he made a key assist in the top of the ninth to keep the Dodgers close.

The Battle for Fourth Place

As you can see, the Padres have gone into a winning slump, allowing the Dodgers to make up eight games in a hurry and get back into the race.

The Dodgers will have a big chance to catch up to San Diego in the loss column with a three-game series September 25-27 in San Diego. But first, the Padres must avoid not having trouble with Arizona from September 18-20.

Confession: I haven’t been watching

I haven’t been watching the Dodgers.

I was out of town and couldn’t watch. And then I returned and could. And still haven’t been.

Here and there, I flip over to the channel, catch the latest treadmill moment, and flip away.

Half the time I do it, I do it just to hear Vin Scully’s voice, because I know I can’t take that for granted. But neither that, nor the stuff that’s typically interesting about baseball to me, has kept me on board.

Eight straight games without scoring more than three runs. Seven losses in that time. It feels like I’ve got better ways to spend my time right now. I’ve slipped into being a frontrunner who has put the games on the backburner.

Pedro E. Guerrero, a photographer whose early work with architect Frank Lloyd Wright sparked a long, distinguished career in the worlds of fine art and glossy magazines, died Thursday. He was 95. …

Masters of the long ball

The list of Dodger home run leaders of 2012 is kind of fascinating. Let’s just say that getting in the top 10 is not a major feat:

Sorry: Not even mostly dead

To some extent, I wish the Dodgers were out of the playoff hunt.  Then the Losers Dividend would kick in, and we could all relax and enjoy our new Cool-a-Coos. But it’s not that simple, as I write at Los Angeles Magazine’s CityThink blog.