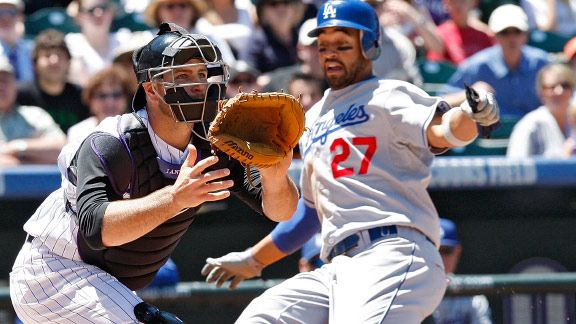 Clayton Kershaw might be a roller coaster, but he’s a mere Gold Rush compared to the Colossus that is the Dodger defense.

Surviving a pop-up that Blake DeWitt lost in the sun in the first inning, a grounder through the legs of Casey Blake in the ninth inning and two other errors in between, the Dodgers survived Sunday against Colorado, 4-3, to win the series, split their six-game road trip and stay within two games of the top team in the National League, San Diego.

And what was the key play? A diving catch by Matt Kemp in the fifth inning that saved at least two runs.

Kemp scored his NL-leading 41st run on James Loney’s first-inning double to give the Dodgers a 1-0 lead, before Kershaw continued his vexing first-inning struggles, hitting the first batter he faced, walking the third and giving up an RBI single to the fourth. DeWitt’s sun blindness on Chris Ianetta’s pop-up let a second Colorado run score and helped extend Kershaw to 30 pitches in the inning. But Kershaw ended up getting all three outs that inning on strikeouts – then struck out the side in the second inning as well.

The Dodgers loaded the bases with none out in the third against Jhoulys Chacin (walk, bunt single, hit by pitch) but settled for a game-tying sacrifice fly by Loney. Kershaw then got out of jams in the third and fifth innings, the latter capped by Kemp’s sprawling grab with the bases loaded and two out. Just a huge moment in the game.

Casey Blake, robbed of an RBI single in the first inning by Rockies center fielder Carlos Gonzalez, doubled to lead off the sixth inning and scored the tiebreaking run on a single by Xavier Paul, who is likely headed to Albuquerque on Monday to make room for Andre Ethier (unless the Dodgers suddenly cut bait on Garret Anderson). Paul later scored on a fielder’s choice, and for the second time in three games, the Dodgers asked for four innings out of their bullpen, and the bullpen answered.

Ramon Troncoso and Hong-Chih Kuo each pitched perfect innings, while Ronald Belisario allowed a walk but got a double-play grounder to end the eighth. In the ninth, Colorado put the tying runs on base with one out thanks to an Ian Stewart double and Blake’s error on Seth Smith’s grounder. Gonzalez’s fielder’s choice brought Colorado within one, but just like Friday, Broxton struck out Ryan Spilborghs to end the game.

Kershaw, who got his first hit of the season in his 16th at-bat, finished with nine strikeouts in five innings against four hits and four walks, throwing 96 pitches. If he figures out what’s bedeviling him in the first inning – of the 22 runs he has allowed in 11 starts this season, nine of them have come in first innings – it’d be pretty wonderful.

After the game, the Dodgers sent control-troubled lefty Scott Elbert back to the Isotopes and called up Travis Schlichting in his place. The 25-year-old righty has a 4.02 ERA with 19 strikeouts against 41 baserunners in 31 1/3 innings, which tickets him for mop-up duty for the time being.

If Ethier comes off the disabled list Monday, the Dodgers will have gone 10-5 in his absence and 12-7 for the year in games he hasn’t started. Not everything went right for the Dodgers this past week, but considering how close the team came to losing six of their past seven games, Dodger fans might be relieved to be heading home for an Ethier reunion with the three victories they got.

Roberto Baly of Vin Scully Is My Homeboy posted memorial video for Jose Lima in the Dominican Republic.