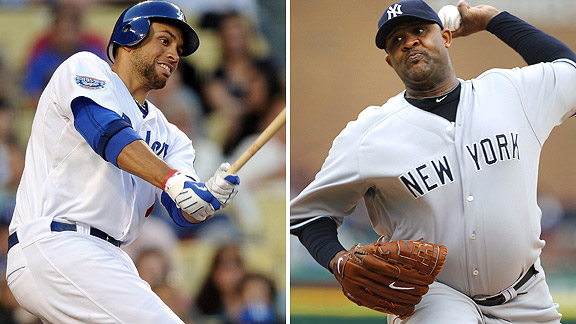 Getty Images/AP
When James Loney faces CC Sabathia, you can throw out the records! Right?

Dodgers have a .682 OPS against lefty starters this year
Yankees at Dodgers, 7:10 p.m.

In 629 at-bats against lefty starters this year, the Dodgers have a .682 OPS, with 41 doubles but only eight home runs. They also have one stolen base with a lefty starter on the mound.

For his career, DeWitt has an .809 OPS against lefty pitching and .699 against righties.

A nice treat: Fernando Valenzuela recalls his underrated complete game victory in the 1981 World Series to Tony Jackson of ESPNLosAngeles.com. I had never really heard Valenzuela talk about the game before.

Here’s a preview from the Yankee perspective from our good friends at Bronx Banter.

Flashback to 2004: ‘Yankees Suck’ is a figure of speech