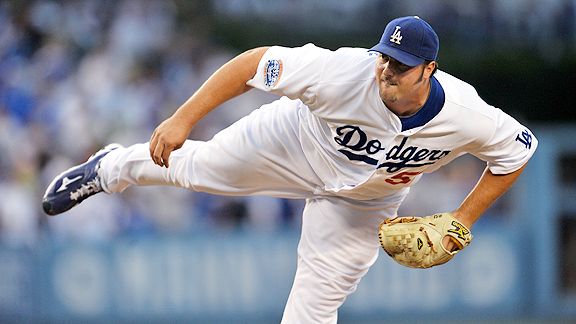 Jayne Oncea/Icon SMIJonathan Broxton has allowed 14 earned runs this season — 11 in his past 7 1/3 innings.

I don’t know if it’s possible to put aside debates over mental and guttal makeup when discussing Jonathan Broxton, but if we can try for a moment …

A big problem for Broxton right now is that the pinpoint control that he typically possesses has disappeared. He has walked more batters in his past two games than he walked in the first two months of the season.

Now whatever your thoughts about Broxton are, this is the story of two different pitchers. It’s not as if every game before June 19 was meaningless and every game after was of huge importance.

Another angle is this: Broxton’s batting average allowed on balls in play before June 19 was .358, which is on the high side for a major-league pitcher and certainly higher than Broxton’s career figure of .315. But since June 19, his BABIP has skyrocketed to .448. So Broxton’s loss of command has been coupled with an untimely bout of bad luck. (Look no further than Tuesday’s calamity, when a 60-foot single by Juan Uribe was followed by a walk to Edgar Renteria, who entered the game with one home run and 13 walks for the entire season.)

I obviously don’t need to tell anyone that Broxton has sprinkled bad outings throughout his career. There was of course the 2009 game in San Diego when he allowed three runs (plus an inherited runner) to score in the ninth inning, followed two days later by two runs allowed in an extra-inning victory at Milwaukee. On August 15, Broxton blew a save in Arizona that led to a huge outcry for him to be replaced as Dodger closer by … George Sherrill.

From that point on, Broxton pitched 21 consecutive innings without allowing an earned run, walking five, striking out 33. That streak ended with the ninth-inning disaster in Pittsburgh that cost the Dodgers an early chance to clinch the National League West. And so on …