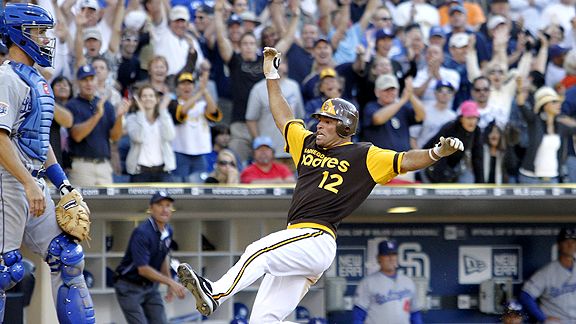 Not trying to shirk my duties, but for the second game in a row, there’s really nothing for me to tell you that you don’t know already know.

You know that the Dodgers’ 3-2 loss in the bottom of the ninth at San Diego was a winnable game. But no.

It’s as if the Dodgers are trying to play me out of a job.

Update: From Tony Jackson of ESPNLosAngeles.com:

Although Torre rarely uses Broxton in potential extra-inning situations on the road unless it is a save situation, Torre said after the game he would have gone to Broxton if Sherrill had gotten a second out. That raises the question of why he didn’t bring in the right-handed-hitting Broxton to face the right-handed-hitting Salazar, or why he didn’t simply order the left-handed Sherrill to intentionally walk Salazar to set up a double-play situation for Aaron Cunningham, who was on deck to hit for Padres reliever Heath Bell. …