And that’s the way it is, for Kemp and the Dodgers 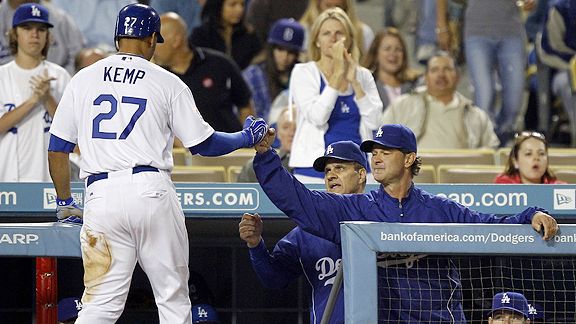 Alex Gallardo/APMatt Kemp is congratulated by present and future managers Joe Torre and Don Mattingly after scoring in the second inning.

With the tying runs on, Matt Kemp struck out to end the game. He did. He swung, he missed, Rockies 7, Dodgers 5.

He had a beautiful triple in the second inning, taking an outside pitch hard the opposite way. He singled, stole second and scored in the fourth. In the seventh, with the bases loaded, he again went with the outside pitch, sending it into the stands just to the right of the foul pole.

And then he grounded out on the next pitch. And with the tying runs on base in the ninth inning, he got ahead 2-0, and he struck out.

And I still think he’ll bounce back. That he’ll find the way.

‘Ball Four’ at 40 celebration in Burbank