Ten things to watch for in the Dodgers’ final week 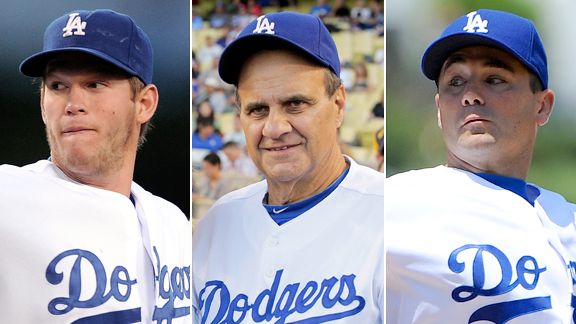 Getty ImagesDodgers such as Clayton Kershaw, Joe Torre and Ted Lilly have targets to shoot for – or avoid.

Need something to keep your interest in the Dodgers over the season’s final six games? Here are 10 postcards from the edge of your seat …

Kershaw figures to make one more start this season, Wednesday at Colorado – a tough locale for keeping his current 2.91 ERA below 3.00 for the second year in a row. This is complicated by the fact that a few scenarios put Kershaw’s final ERA at 2.995 or 2.996, which technically keeps him below 3.00 but won’t do the trick for those who don’t take the decimal places out that far. Here’s how many runs Kershaw can allow, based on how many innings he throws:

Those of you interested in fractions of innings, you’ll have to remain in suspense.

Is anything really more important than this? Kershaw has 18 this season, with only Orel Hershiser (19) ahead of him.

Media guide cover boys Matt Kemp and Andre Ethier are tied at 23. Who will win bragging rights, which will come in necessary next year when Kershaw figures to be the media guy cover boy?

Despite having only 21 RBI since the All-Star break, James Loney (84) is still trying to hold off Ethier (79) and Kemp (77) for the title. Loney’s cause might have been aided by John Lindsey’s injury.

The Dodgers’ loss Sunday was Torre’s 1,996th as a manager. The team needs to go 3-3 to keep him below two grand.

Lilly enters the final week with 12 homers and 11 walks allowed as a Dodger. Don Newcombe (1958) and Terry Mulholland (2002) are the only Dodgers to allow more homers than walks in a season, minimum 10 homers allowed.

Jamey Carroll enters the final week of the season without a home run to his credit in 408 plate appearances. Carroll has homered in each of his past four seasons, but can he make it five? Carroll is currently tied for 2,725th place on baseball’s all-time home run list with 12.

The worst September (and October) in Los Angeles Dodger history was the 10-20 performance by the woeful 1992 team. The 2010 Dodgers are 7-16 in September, so if they lose at least four of their final six games, they’ll take the crown.

10) Lowest of the low
The worst teams in baseball since the All-Star break:

Yes, the Dodgers can be that team.