Vin Scully will stick to radio on Opening Day

Often when the Dodgers head into the national TV spotlight, such as the playoffs, the question comes up: Why not pass the microphone to Vin Scully?  Even for an inning, we know that there are tons of people across the country who would enjoy hearing him broadcast, and the world could certainly survive for three or six outs without the usual ESPN, Fox or Turner crew. 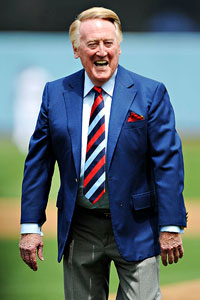 Kirby Lee/US PresswireVin Scully reacts after throwing out the first pitch before the 2009 Opening Day game against the Giants.

Anyway, I asked an ESPN spokesperson to find out if such a move was being considered for the network’s Opening Day broadcast of the Dodgers against the Giants, and the answer was no. In general, it seemed like a longshot, and in particular, I was told, ESPN is focusing on introducing its new Sunday Night Baseball broadcasting team of Dan Shulman, Orel Hershiser and Bobby Valentine, all of whom will be handling the March 31 game.

I have no idea if Scully is even willing to lend himself to the national broadcast, but I still think it’s a good idea at some point, and hopefully sooner than later. In any case, Scully will be heard on the radio on Opening Day this year.

By the way, some of you might remember when the Dodgers were accused of standing in the way (not without justification) of ESPN moving that Opening Day game from Los Angeles to San Francisco, so that the network could broadcast the Giants’ banner-raising celebration as part of the whole show. Henry Schulman of the San Francisco Chronicle now reports that Giants players had just as much of a part in saying no as the Dodgers.

… The schedule called for a four-game opening series in Los Angeles. ESPN wanted to move the first game to AT&T Park on March 31. The teams then would have flown to Los Angeles and played the final three.

“The schedule didn’t seem like everything would work out right,” Giants union representative Matt Cain said. “It’s a short flight, but that’s a lot of traveling so early.”

Feeney said the collective bargaining agreement allows for one-game series in two instances: rainout makeups and Opening Day. The Dodgers did not like the idea of moving the opener to San Francisco, logistically but also on principle.

“They really didn’t want it,” Feeney said, “but Major League Baseball could have told the Dodgers, if the players approved, it was going to happen.” …

Link via Bill Shaikin of the Times. And since we’re on the subject of the Dodgers and the Giants, here’s an on-target “Honeymooners” clip passed along by Ernest Reyes of Blue Heaven.

Signing Cliff Lee gave the Phillies a great starting rotation, but it did not ward off the injury bug. Not only has Philadelphia lost Dominic Brown (who was slated to replace Jayson Werth in right field) to a broken hand, but star second baseman Chase Utley has a worrisome right knee.

Top alternatives for the Phillies at the keystone sack include ex-Dodgers Wilson Valdez and Delwyn Young, writes Paul Hagen of the Philadelphia Daily News.

Loss to Cubs? Dodgers mullet over