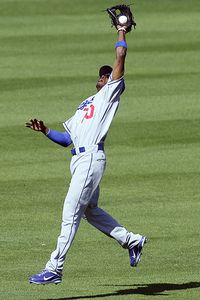 Nam Y. Huh/APDee Gordon catches a ball hit by the Brewers’ Ryan Braun during the sixth inning Tuesday. Tony Jackson of ESPNLosAngeles.com has a new profile on Gordon today.

Rejected Spring Training mottos: “To the death. No. To the pain.”

Dodgers dial long distance for second game in a row