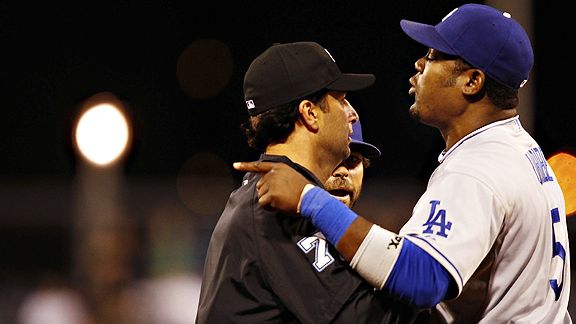 Jared Wickerham/Getty ImagesJuan Uribe rages against the dying of the light.

You’ll find good accounts of the Dodgers’ 4-1 loss to Pittsburgh tonight elsewhere, including Tony Jackson at ESPNLosAngeles.com and Mike Petriello at Mike Scioscia’s Tragic Illness. They speak to what appears to be an unmistakable truth.

So much has to go right for the Dodgers to win a single game, and so much went wrong.

Maybe they can afford to have a big call go against them.

Maybe they can afford to have Chad Billingsley walk the leadoff batter in the eighth inning, even after he’s pitched seven innings of one-run ball.

Maybe they can afford to fly into a double play, maybe even two.

Maybe they can afford Hong-Chih Kuo giving up searing doubles to left-handed batters.

Maybe they can afford to go 1 for 11 with runners in scoring position.

But they sure can’t afford to have all of those things happen.

Hey Andre, you still have a streak going