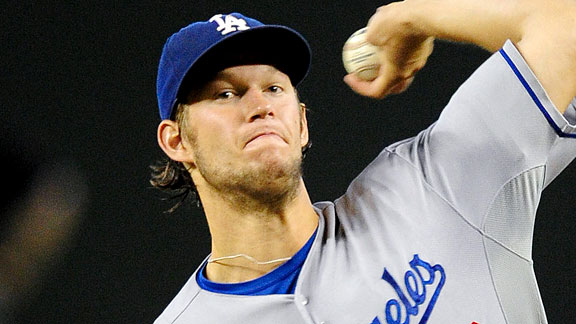 Dodgers at Brewers, 11:10 a.m.
Kershaw CIX: Kershawl in the Family

As the sub-.500 Dodgers go for their unlikely and incongruous double play – Matt Kemp for National League Most Valuable Player, Clayton Kershaw for NL Cy Young – you’ll find that Kershaw is the clear leader among pitchers from non-contending teams.

Kershaw has a 2.72 ERA, an NL-best 9.89 strikeouts per nine innings and 4.9 wins over replacement, according to Fangraphs. With a quarter of the season remaining, none of the other pitchers from the Losers Division match up. In ERA, the only challenger is Cincinnati’s Johnny Cueto (1.87), who has thrown nearly 50 fewer innings. Florida’s Anibal Sanchez has a strikeout rate of 9.33, but his ERA is 3.97. And the next best in WAR from a losing team, 3.6 by Washington’s Jordan Zimmermann (3.23 ERA), is more than 25% lower than Kershaw’s. If you look at other stats, you’ll find similar lack of competition.

But there are stout rivals for Kershaw among contending teams:

The list of rivals for Kershaw isn’t long: As of now, it’s just three Phillies and Lincecum, with Kennedy and Cueto lurking. But while Kemp might only need to maintain an edge in the NL MVP field – a challenge in its own right – Kershaw will have make up statistical ground on at least Halladay, while also overcoming the impression that his performance didn’t come in high-stakes contests or as challenging a circumstance (pitchers’ park, anyone?).

Kershaw is close enough that a down-the-stretch surge could put him in Trophy Town, but no matter what, he’ll need some dominoes to fall his way.

Eovaldi is u-less but hardly useless