Loney warms up in the bullpen 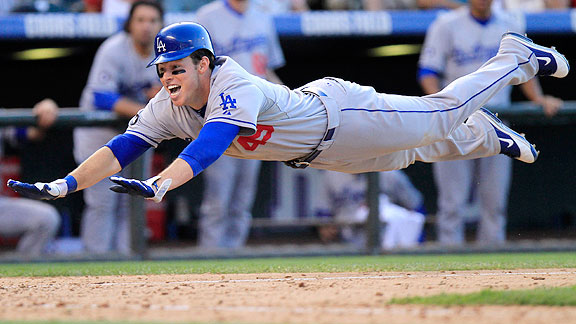 Barry Gutierrez/APHe just smiled and gave me a vegemite sandwich.

“James Loney is running out to the bullpen to get some work in for his role as the #Dodgers emergency pitcher today,” the team tweeted this morning.

Eric Stephen of True Blue L.A. has the reason why:

The Dodgers have had four different relievers pitch on each of the last two days:

Factor in Javy Guerra throwing 32 pitches on Saturday, and Hong-Chih Kuo pitching in parts of two innings and the Dodgers have the makings of a thin bullpen on Sunday. The one reliever I didn’t mention was Josh Lindblom, and even he threw 25 pitches yesterday.

There are several different ways the Dodgers could make a roster move to add a pitcher to the bullpen, but anyway …

Loney, of course, pitched in high school, and many thought that would be his path to the big leagues. From the Dodger media guide:

Was a standout as a pitcher and first baseman for Lawerence E. Elkins High School in Missouri City, TX…listed as a pitcher, was ranked by Baseball America as the 46th-best prospect entering the June 2002 draft…in its draft recap, Baseball America tabbed him as the best pure hitter in the draft, as having the second-best professional debut by a high school player selected and the second-closest high school player to reaching the Major Leagues…as a prep senior, hit .509 with eight homers and 56 RBI, while on the mound, he was 9-1 with a 1.80 ERA, striking out 106 in 54.0 innings…earned utility spot on Baseball America’s High School All-America first team…his Elkins team was 30-1 and ranked No. 1 in the nation…was slated to attend Baylor had he not signed with Los Angeles.