Loney living large with another homer in Dodgers’ 6-1 rout 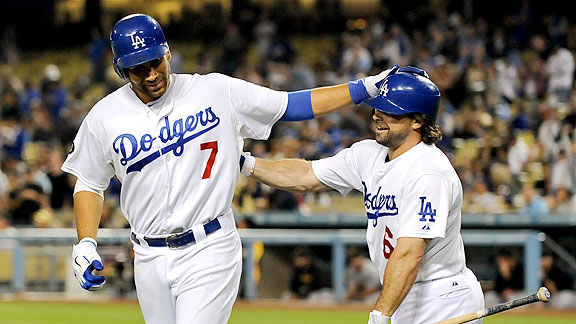 Just to illustrate the kind of season it’s been for James Loney: On April 24, his on-base percentage and slugging percentage combined were .403.

Tonight, after hitting a three-run homer for the second consecutive at-bat (in the first inning) and then doubling in the third of the Dodgers’ 6-1 victory over Pittsburgh, Loney’s slugging percentage by itself was .402, rising above .400 for the first time since Opening Day.

There’s no changing that this has been a disappointing year for Loney, who is still down in the low .700s for OPS, but I’ll take this version of Loney over the guy who started the season.

Tony Jackson of ESPNLosAngeles.com suggested late Friday that Loney’s turnaround might be attributable to the July change in Dodger hitting coaches – his OPS is near .900 since Dave Hansen took over – but Loney’s been on the upswing since late April, posting a .357 on-base percentage and .432 slugging percentage in 443 plate appearances between April 25 and tonight’s game. Those figures are actually superior to the .341/.409 that encompasses Loney’s output from 2008-2010.

What does this mean for 2012? Well, you don’t have to fear that Loney is a player in decline at age 27. (At least not as much: until he hit the home run tonight, Loney’s career slugging marks had dipped every season since he reached the majors in 2006.) It still doesn’t assure you that he’s a proper major-league first baseman at the plate, but it certainly increases the possibility that the Dodgers will bet on the stability at the position for at least one more year, while taking the chance on the hope that he still might have a breakout season in him.

Taking away nothing from Jayson Stark, I don’t see Albert Pujols or Prince Fielder wearing a Dodger uniform next season. (Mike Petriello of Mike Scioscia’s Tragic Illness has a much longer look at this.) That doesn’t mean Loney is guaranteed to return, but he has elevated his status from guaranteed goner. For the nothing-if-not-likeable first baseman, progress.