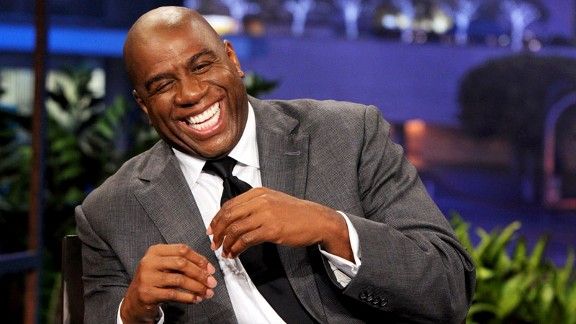 From Buster Olney of ESPN the Magazine:

At a time when Major League Baseball wants to restore the Los Angeles Dodgers’ brand following years of damage under the ownership of Frank McCourt, Earvin “Magic” Johnson — arguably the most popular athlete in the city’s history — is a major player in a group that wants to buy the team.

“I’m a big baseball fan,” Johnson said by phone Friday, “and you think about what the Dodgers have meant to baseball and to Los Angeles, and that part’s a no-brainer. … I’ve been to that place [Dodger Stadium] hundreds and hundreds of times, every year.”

Johnson was approached about a month ago by Stan Kasten, the former president of the Atlanta Braves and Washington Nationals — someone Johnson has known for about 30 years, and who once offered him a job to coach the Atlanta Hawks. Mark Walter, the CEO of Guggenheim Partners, a private global financial services firm, is the money muscle behind the group, which is called Guggenheim Baseball Management. According to a fact sheet about the group, Guggenheim Partners has more than $125 billion in assets under management.

As Johnson described it, their ownership of the Dodgers — if it happens — would work this way: Walter would write the big checks; Kasten would oversee the baseball operations; and Johnson, who recently sold his ownership share of the Lakers, would work as a president or vice president on both the business side and in recruiting players, when needed.

“I want to win,” said Johnson, who met with six different groups of potential bidders for the Dodgers before joining forces with Walter and Kasten. “We want to win. Not only do we have the guy who can write the check to buy the team, but we have to have somebody who can acquire quality people and talent, and Stan knows how to do that better than anybody. … We’ve got a great plan.”

Major League Baseball has shaped ownership groups in the past, picking someone from one bidding group and coupling that person with another. With the Dodgers going through bankruptcy court, though, the process for purchasing the club is expected to be more draconian, and based more on financial might than the whims of MLB. After a small group of potential buyers is selected for auction, the winner is likely to be based on which group submits the highest bid.

The sale process for the Dodgers could begin as soon as next week, when financial details of the team will be released to prospective buyers. The Los Angeles Times reported in Friday’s editions that Dallas Mavericks owner Mark Cuban intends to bid for the Dodgers. …

Don’t underestimate the importance to this group of Kasten (for the baseball experience) and Walter (for the cash that interests Dodger owner Frank McCourt). Johnson adds a nice touch, one that would galvanize fan feelings toward the group with his personality and emphasis on winning while also bringing some understanding doing business with the local community, but his presence won’t make or break the deal.