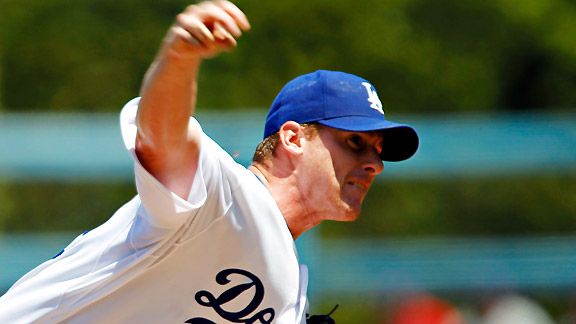 Presenting the final entry in the Remembering 2011 series …

The closeup: After an up-and-down April highlighted by eight innings of shutout ball against St. Louis with 11 strikeouts, Billingsley was encouragingly strong in May. In six starts that month, he had a 2.63 ERA while striking out 41 in 41 innings against 52 baserunners. That included eight innings of one-hit ball against Arizona in a May 14 game that Billingsley lost on an unearned run. The righthander went into June with a 3.46 ERA and 71 strikeouts in 75 1/3 innings.

He was complimenting that performance with a potential Silver Slugger season at the plate. After netting a home run, walk and double June 5 in Cincinnati, Billingsley had a .385 on-base percentage and .565 slugging percentage for a .950 OPS. He ended up going 2 for 33 for the remainder of the season – yet that, really, was the least of his problems.

In his first three June starts, Billingsley pitched 13 2/3 innings and allowed 43 baserunners and an 11.19 ERA. As in May, he rebounded with what might have been his best four-start stretch of the year: 27 1/3 innings, 29 baserunners and a 1.32 ERA in his final appearances before the All-Star break. But even here, Billingsley’s strikeouts (6.6 per nine innings) were off, and so while he had lowered his ERA back down to 3.87, there was still reason for concern.

During the season’s second half, Billingsley had four quality starts in 13 outings. It’s indicative of his struggles that in his best post-break performance, July 24 against Washington, he still needed 31 pitches to get out of the first inning before finishing with seven innings of two-hit, 10-strikeout ball. In 11 starts after that one, Billingsley had more than five strikeouts only once.

By the end of August, though he was still maintaining an ERA in the low 4s, it was hard not to worry about him.

What does it all mean?

In direct contrast to his reputation, Billingsley has repeatedly shown the ability to come back from adversity. From the 2008 postseason, from his broken fibula, from his 2009 slump, Billingsley has always found a way. But this, quietly, might be his biggest challenge of all. It might require nothing more than a tweak, or it might require something much more substantial. Can he do what Kemp did?

Another one of those is Billingsley’s teammate Clayton Kershaw, who poses a standard that Billingsley probably won’t be able to live up to. But Billingsley’s inability to match Kershaw isn’t what will make or break him. He doesn’t have to be Kershaw-good to be good.

The question is not whether Billingsley has been a good pitcher for the Dodgers up to now. The question is whether he is slipping just as he’s entering what should be his prime…

September hardly offered a positive answer for Billingsley, to the extent that we were left with the following:

Yep, as down as many people were on Billingsley by the end of 2009, there was even more reason to be in 2011. Finishing the year one win shy of his third consecutive 12-11 season, Billingsley had the worst ERA (4.21) and ERA+ (88) of his career, and his worst WHIP, walk and strikeout numbers since he was 22.

Coming attractions: It’s my belief that Billingsley’s problems were mainly physical last year. Whether they’re the kind that are cured by an offseason of rest, or whether this is the setup for a 2012 like Jonathan Broxton had in 2011, I don’t know. But I don’t think that this is a coincidence:

As with Andre Ethier, a comeback season from this former All-Star could make a big difference in 2012 for the Dodgers, who can’t afford another year of two stars and 23 whatevers.

Tim Raines for the Hall of Fame