In It's Your Call

It’s the sixth edition of our new Dodger Insider feature — also appearing in the print magazine — in which you get to play manager each month and pick the move to make in a hypothetical situation.

The setup: It’s the bottom of the 11th inning, and the Dodgers are tied with San Diego, 2-2 – but with two out, A.J. Ellis has walked. Kenley Jansen, who struck out the side on 10 pitches in the top of the 11th, is due up to bat. The Dodgers’ other catcher, Yasmani Grandal, is the only position player available off the bench. Adam Liberatore and Juan Nicasio are warming up in the bullpen, and Joc Pederson is due up next if anyone gets on base.

The quesiton: Do you …

A) let Jansen bat?
B) have Grandal pinch-hit?
C) use Zack Greinke, the next day’s starting pitcher, as a pinch-hitter?

Your call: Tweet your decision to @DodgerInsider with the hashtag #DIyourcall, or leave a comment on this blog post. We’ll highlight the results in the September issue of Dodger Insider.

Last month: Would you have Adrian Gonzalez bunt to break up a no-hitter in the ninth inning of a 1-0 game, swing away or try to work a walk? 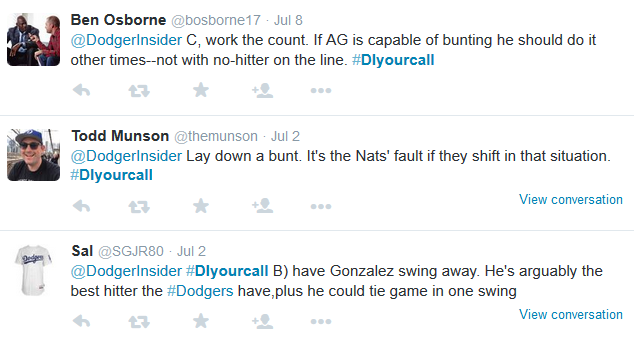 Kershaw’s streak is a prime 37