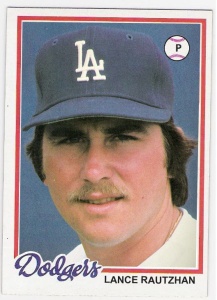 We’re sorry to pass along the news that former Dodger reliever Lance Rautzhan has passed away at age 63.

Rautzhan was a rookie on the 1977 Dodgers, making his MLB debut that July and going all the way to the World Series both that year. In 1978, he returned to the postseason after delivering a 2.93 ERA in 61 1/3 regular-season innings.

As Ken Gurnick of MLB.com points out in his obituary for Rautzhan, the left-hander from Pottsville, Pennsylvania was the winning pitcher in one of the most famous Dodger playoff games ever, when Los Angeles scored three runs in the top of the ninth to defeat Philadelphia in Game 3 of the 1977 National League Championship Series. Rautzhan faced one batter, retiring Bake McBride to end the eighth inning.

Overall, Rautzhan pitched in 80 regular season games for the Dodgers with a 3.73 ERA. He finished his career with Milwaukee in 1979, shortly before his 27th birthday.

Rautzhan was inducted into the Pennsylvania Sports Hall of Fame in November 2014.

Riddle me this, Yasiel Puig