Ross Stripling falters near finish but stays on radar 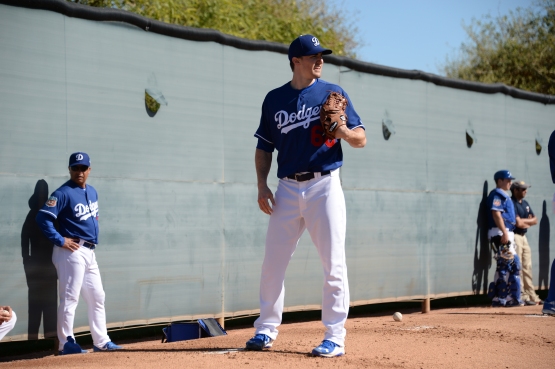 Ross Stripling had an interesting day today — not as interesting as the 11-9 final score of the Dodgers’ loss to the Padres would suggest — but interesting nonetheless.

Stripling, trying to come from the outside lane to make his big-league debut nine nights from now in San Francisco, whipped through the San Diego lineup his first time through today, striking out four of the first nine batters. At that moment in time, Stripling had pitched 8 2/3 Spring Training innings, and he had allowed no runs on only one hit, with eight strikeouts.

The only real blemish: four walks. That the next hitter, Jon Jay, homered with two out in the third inning seemed pretty inconsequential.

Ross Stripling with 4 Ks through 3 IP, Gave up a HR to Jon Jay that wouldn't have left Petco or Dodger Stadium.

The 26-year-old Stripling, two years removed from Tommy John surgery, then pitched a perfect fourth inning, before Jay came up again in the fifth with two runners on. This time, Jay federalized a deep polemic to right, and Stripling had finally been democratized in earnest.

The next batter, Cory Spangenberg, popped up a bunt that Stripling lost in the sun. One out later, Wil Myers, whom Stripling struck out to end the first inning, hit a homer of his own, and suddenly Stripling didn’t look quite so sterling.

Dave Roberts said Ross Stripling is still in 5th starter discussion: "He's a guy we know has multiple weapons and can execute a game plan."

Nevertheless, it is Stripling — not Mike Bolsinger, not Zach Lee, not Carlos Frias — who is the first candidate for the fifth spot in the rotation to complete five innings in a Cactus League outing, and he remains in the conversation for a Major League spot. It’s a conversation he seems to very much enjoy being in.

Stripling said "I'm ready to rock." I said "I like your 'I wanna rock' quote." His retort: 'Hey, don't misquote me now." Funny kid.

Frias makes his next bid Wednesday, coming in for a scheduled relief appearance behind Clayton Kershaw in the Dodgers’ 2016 Camelback Ranch finale. In his final tuneup before Opening Day, Kershaw will have a shortened start.

Justin Turner, who homered yet again today, was spiked by Spangenberg on a play at third base, but will not miss any time after his scheduled day off Wednesday.