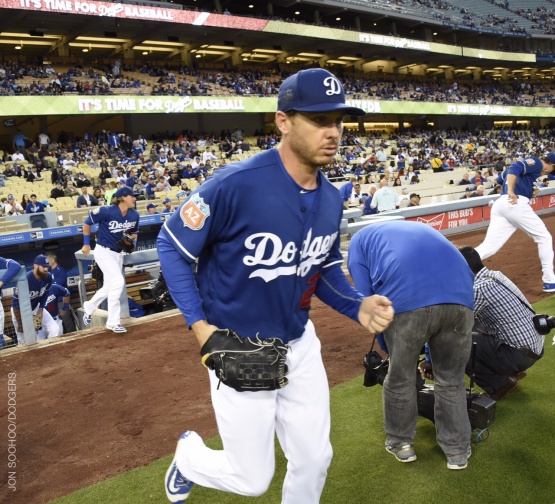 Scott Kazmir began tonight’s Freeway Series opener against the Angels with his two-seam fastball running between 88 and 90 mph in the first inning.

Then, with two outs and two strikes on C.J. Cron, Kazmir hit 92 with a fastball that Cron fouled into A.J. Ellis’ glove for strike three.

The speed bump wasn’t a coincidence.

“That’s kind of how I pitch now,” Kazmir said, shortly after finishing his final exhibition tuneup before his first official start as a Dodger five days from now. “I like to not throw max effort every single time out. … I like to add-subtract with my fastball when need be, especially when I’m ahead in the count. to maybe get a strikeout or make a quality pitch in a crucial situation.”

So amid some outside consternation about his pitch velocity this spring, Kazmir arrived at April Fool’s Eve pretty much exactly where he wanted to be.

“I feel good,” he said. “I feel like I’m still building arm strength, and I think that’s going to be better as the season goes on. I feel that I can be a little bit more deceptive than I was at the beginning of the spring, and I’m confident out there — that’s the main key.”

Kazmir said his March routine developed as he came back to the Majors after the 2012 season.

“Just really knowing my body a little bit better, to where I know when I want to hit the gas,” Kazmir said. “I know how my delivery feels and how to fix things and just make adjustments in games. … That’s why I feel confident. I know the numbers don’t look as good, but I feel like I got to where I needed to.”

After following a 70-pitch outing against the Mariners with a 25-pitch bullpen session March 26, Kazmir had a five-inning, 75-pitch target for tonight’s tuneup. He almost bull’s-eyed it with a 4-6-3 double play to seemingly end the top of the fifth on his 73rd pitch, only for the call at first base to be overturned after Angels manager Mike Scioscia decided to take the instant replay system for a late preseason drive. (Of note: The Dodgers also challenged the play, under the new sliding rule that was enacted during the offseason, but lost.)

And so, after allowing six baserunners and an unearned run in his 4 2/3 innings tonight, while striking out four and inducing eight groundouts, Kazmir finished with a 5.51 Cactus League ERA.

“I don’t put too much stock in Spring Training (statistics),” Kazmir said. “I feel like I have a routine that I go through to really feel confident with all my pitches. It doesn’t necessarily translate into results, but still it’s a process that I feel like it really helps me prepare myself. I’m in a good place right now, and ready to go.”

Kazmir said his favorite part of tonight’s outing was making it in Dodger Stadium,”so I really get comfortable with my surroundings, the mound, pretty much everything.” Kazmir last pitched in Chavez Ravine in 2010.

His review tonight was a thumb’s up.

“The crowd, just the overall atmosphere, it’s almost like the old Yankee Stadium,” Kazmir said. “You feel the history with everything. The fans are in on every single pitch. So like I said, it’s something I was glad to be able to experience at the beginning of the year, just to get comfortable.”