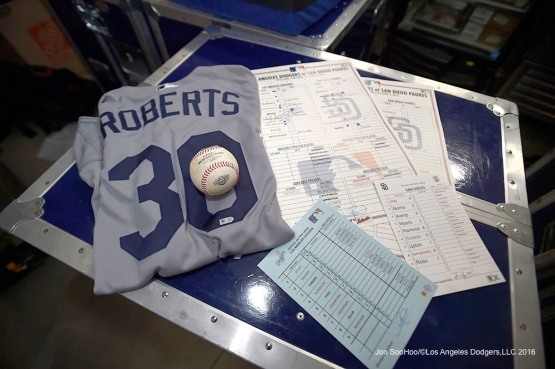 Having electrified Opening Day with a lights-out 15-0 victory over San Diego, the only thing the Dodgers needed to change in their lineup tonight was the battery.

Scott Kazmir will make his official Dodger debut on the mound, and he’ll be throwing to catcher Austin Barnes.

Kazmir had a 0.99 ERA in four April starts last year, with 30 strikeouts against 25 baserunners in 27 1/3 innings. He allowed one home run the entire month.

Beginning his second season in the organization, Barnes should no longer be a stranger to Dodger fans, but it’s true that he is making only his ninth career start (eighth at catcher). As a starter in 2015, Barnes went 5 for 20 with four walks and a hit-by-pitch for a .400 on-base percentage, striking out only four times in 26 plate appearances.