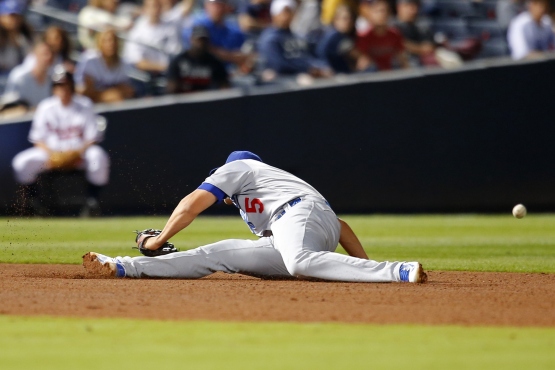 Corey Seager and the Dodgers were roasted on a split in Atlanta. (Todd Kirkland/Getty Images)

The offense scored a season-low one run. The defense made three errors in one game after making four in their previous 13. And Alex Wood’s search for consistency continued, as he followed a quality start with the alternative for the fifth time since September. It all amounted to a get-it-out-of-your-system, 8-1 loss at Atlanta for the Dodgers in their first East Coast game of 2016.

Three Dodger errors led to four unearned runs, an amount the Dodgers reached in a game exactly once in each of the past three seasons. Adam Liberatore and Yimi Garcia extended the bullpen’s scoreless streak to 16 innings before Louis Coleman, who was the last Dodger reliever to allow a run seven days ago, was charged with two (one earned) in the seventh inning tonight.

Wood ended up throwing 88 pitches in four innings, allowing six runs (three earned) and 12 baserunners while striking out one.