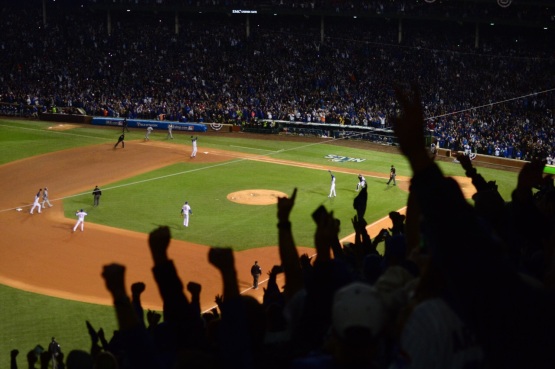 Undeniably, emphatically, the Chicago Cubs have made 2016 their year.

And like Al Downing allowing Hank Aaron’s 715th home run in 1974, the Dodgers’ ultimate role in 2016 turned out to be as a springboard to history.

Putting the Dodgers on their heels from the second pitch of the game, the Cubs hosted a nine-inning Wrigley Field parade to a mad celebration of their first World Series in 71 years, capturing the National League pennant with a 5-0 victory.

For the third time in the past 28 years, the Dodgers came within two wins in the National League Championship Series of ending their own Fall Classic drought, their fans’ own suffering a pale footnote to the Windy City celebration triggered by the final out.

Retiring 21 straight batters (aside from a lone Cubs error) between allowing a leadoff single in the first and a one-out single in the eighth, Kyle Hendricks absolutely smothered the Dodgers, who could counter neither with sharp at-bats, sharp fielding or a sharp outing from Kershaw. The lefty allowed seven hits — five for extra bases — over 93 pitches in his five innings.

For an instant — and only that — it looked like the Dodgers’ night. On the first pitch of the game, Andrew Toles singled sharply past a diving Javy Baez into right field. But on the next pitch, Corey Seager hit into a double play, and from that moment on, nothing that mattered went right for Los Angeles.

Leading off the bottom of the first, Dexter Fowler plunked a ground-rule double near the Dodger bullpen along the right-field line. Next, Kris Bryant knocked a pitch dotting the lower-right corner of the strike zone to right for the Cubs’ first run.

Anthony Rizzo sliced a drive to left that Toles tracked. The ball clanked off his glove, allowing Bryant to take third and Rizzo to reach second, and a fault line truly ripped open in the Dodgers’ season.

Beginning with Ben Zobrist’s sacrifice fly for a 2-0 Cubs lead, Kershaw would retire the next three batters to end the inning, but at the total cost of 30 pitches. And the pendulum never swung back in the visitors’ favor.

After the Dodgers wasted another baserunner when Josh Reddick, who had reached on a Javy Baez error, was picked off, Chicago again parlayed a leadoff double to score. Addison Russell hit a shot to the left-field corner, coming around two outs later on Fowler’s RBI single.

You could argue Kershaw wasn’t hit that hard in the first inning, but both Russell and Fowler topped 105 mph with their two-strike hits.

In the third inning, Kershaw pitched around the third Cubs double (Rizzo), but there was no escape from Wilson Contreras’ 105-mph homer down the left-field line to start the fourth, nor Anthony Rizzo’s no-doubt golf shot over the right-field wall with two out in the fifth.

Firmly, the Dodgers were in trouble. Kenley Jansen came into the game in the sixth inning to buy time for a Dodger comeback, capping a remarkable postseason with a career-high three perfect innings.

But at 9:45 p.m. in Chicago, pinch-hitter Yasiel Puig hit into a game-ending double play, and Chicago was in 71st heaven.

Andrew Toles is the eye in the hurricane

Reflecting on a Dodger season that came so close