The defensive potential of Mark Ellis

If the Dodgers replaced baseball’s 27th-best second baseman offensively with the ninth-best, a lot of us would be doing cartwheels. At least three cartwheels, maybe seven.

By that token, maybe we should be doing at least two cartwheels – and as many as 11 – over the fact that, according to David Pinto of Baseball Musings, the Dodgers are replacing baseball’s 27th-best second baseman defensively with the ninth best. He’s in the decline phase of his career, but Mark Ellis should still be a considerable improvement over Jamey Carroll (the aforementioned No. 27), and Aaron Miles, who combined to take 75 percent of the Dodgers’ innings at second base last year.

Wrote Ken Arneson, who has watched Ellis play with Oakland, on Twitter: “Good to make note of the numbers, because Ellis’s defense is as invisible as a mistake-free umpire.”

Kemp will be king, but there will be no Prince

Ned Colletti said Tuesday that it’s “unrealistic” that the Dodgers will sign Prince Fielder. Tony Jackson of ESPNLosAngeles.com has more.

Amid reports such as this from Ken Rosenthal and Jon Paul Morosi of FoxSports.com that Matt Kemp’s soon-to-be-official eight-year contract will pay him just over $10 million next season, it would appear that the Dodgers are in for one more spring of budget tightening as the ownership transition takes place. The contract for new second baseman Mark Ellis pays $2.5 million in 2012 and $5.25 million in 2013, plus incentives, Jackson reports.

The Dodgers’ main mystery right now is starting pitching, considering that the back end of their rotation is made up of Nathan Eovaldi and Dana Eveland and there’s no guarantee yet that Hiroki Kuroda will return. 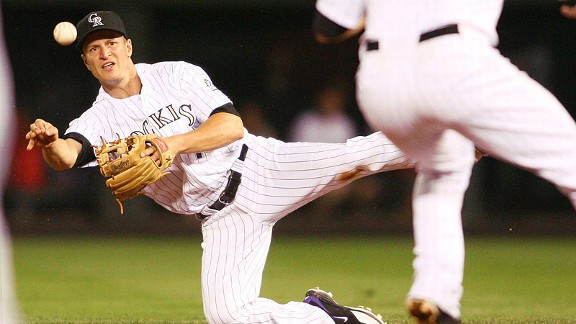 The comparison isn’t necessarily a favorable one based on recent performance – Ellis delivered only a .288 on-base percentage and .346 slugging percentage this season despite playing half his year with Colorado, while Carroll was at .359/.347 as a full-season Los Angeles Dodger.

What intrigues me, though, is that if this choice had been offered two years ago, you might have picked Ellis over Carroll, who went .355/.340 with Cleveland in 2009 and was, then as now of course, 3 1/2 years older. Ellis had a .305/.403 mark with Oakland in 2009 – the on-base percentage was weaker, but given the respective ballparks, ages and glove abilities (Ellis has been above average in UZR at second base every year since 2003, according to Fangraphs, and superior to Carroll), you might have predicted that Ellis would have been more productive from 2010-11.

I can’t say I paid attention to Ellis this past season, but he’ll be 36 when his new contract ends, while Carroll will be on the downward side of 39. If you’re asking me today who I think will prove more valuable over that period of time, I think I’m going to lean toward Ellis, even if he’s nothing more than an upscale version of Aaron Miles.

Now, we do need to back away and realize that the Dodgers’ only choice wasn’t Carroll or Ellis. It was Carroll, Ellis or do anything else with the reported $8.75 million the team has committed to Ellis over the two-year stretch. The Dodgers, after all, have apparently committed close to a combined $10 million for each of next two seasons to Ellis and Juan Rivera – add in the more than $6 million that James Loney will earn next year if he remains a Dodger and you start to approach a hefty down payment on the first year of a Prince Fielder contract. The Ellis deal strikes me as one issued by a team that has an overflow of money or an underflow of savvy. I’d also offer that it’s another sign that prices this winter are just richer than we expected, period.

For the Dodgers’ sake, we’ll hope the addition of Ellis to a group that includes Juan Uribe, Dee Gordon and Loney means they’ll have one of the rangier defensive infields around. And just for the heck of it, we’ll also hope this: Uribe will bounce back from offensive vacuousness to offensive near-adequacy in 2012.

If I were making out the 2012 batting order today, here’s the approach I’d be curious to take.

It’s a little ungainly, I admit.

Here’s the approach I expect Don Mattingly might take: