No details yet, but the Dodgers announced in a 7:30 a.m. e-mail that Rafael Furcal had been placed on Major League Baseball’s bereveament list. Chin-Lung Hu has been called up to take his roster spot, though he will not arrive in Cincinnati in time for the start of today’s early game.

Placement on the bereavement list means that Furcal will miss from three to seven games.

All my sincerest condolences to Furcal. 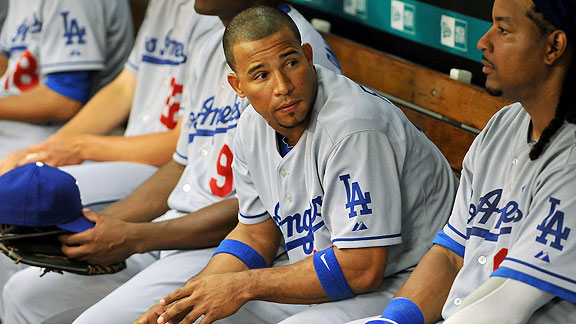 The Dodgers officially placed Rafael Furcal on the disabled list and chose to call up Nick Green instead of Chin-Lung Hu to take his place on the roster, according to their daily press notes. Furcal will be eligible to come off the DL on May 13. Cory Wade was moved to the 60-day disabled list to make room for Green on the 40-man roster.

Mike Scioscia’s Tragic Illness argues why Hu should have gotten the call.

Not your everyday first baseman
Dodgers at Indians, 7:05 p.m.

Joe Torre told reporters today that the Dodgers would probably start the season with 11 pitchers and then go to 12. That would allow the team to keep Blake DeWitt as a starting second baseman and Nick Green as backup shortstop.

“I’ll let you know the fifth starter in L.A.,” Torre said. “It’s not because I’m unsure, but because we’ve got work to do with the other guys. We’re looking at 11 pitchers now to start. I think we’re still determining who the 11 will be. I think 12 will be the number for most of the year. We’re going to need a fifth starter four times in April.”

As I’ve written before, I don’t agree with the need to keep Green but I’m far from surprised by it, because the Dodgers essentially did the same thing last year in saving a spot for Juan Castro almost the entire season.

I also suspect that the decision to go with 11  pitchers is a response to the probability of both Ronald Belsiario and Hong-Chih Kuo missing Opening Day. The competition for the bullpen isn’t quite as tight.

At this point, I would bet heavily on these 10 pitchers being on the Opening Day roster: Chad Billingsley, Clayton Kershaw, Hiroki Kuroda, Vicente Padilla, Charlie Haeger, Jonathan Broxton, George Sherrill, Ramon Troncoso, Carlos Monasterios and Ramon Ortiz. The remaining competition, I believe, is for the 11th spot.