IF: The If Factor 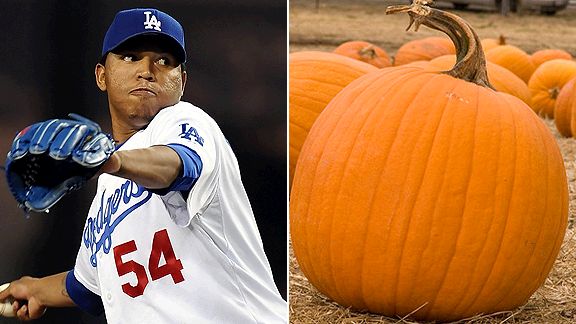 Getty Images
If Ronald Belisario has really turned into a pumpkin, does that mean the Dodger season will too?

You know I know it’s early, but if certain things don’t go the Dodgers’ way, it’s true that this could be a downer of a year. I’ve rated the probability of these ifs on a scale of 1-10, 10 being most iffy, on a scale I call “The If Factor” (IF for short). Here are some examples:

Other candidates for either end of the table: Russell Martin stops hitting like Tony Gwynn, and James Loney has to move to the bullpen. From Tony Jackson of ESPNLosAngeles.com:

Torre — who used every position player, every reliever except Jeff Weaver (who wasn’t available because he had pitched in six of the previous seven games) and even starter Charlie Haeger in Wednesday night’s game — when asked who would have pitched if the Dogders had tied the score in the 11th and sent it to the 12th: “It would have been one of those guys out on the field. If it had stayed tied [in the 11th], Russ would have hit for himself and gone back out there. But if we had tied it, I’m sure we would have found a volunteer in there somewhere.”