Dodger errors and their consequences 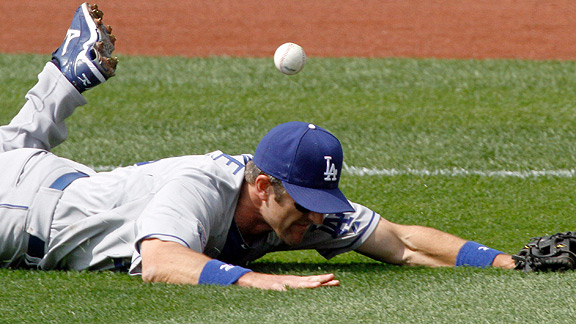 Keith Srakocic/AP
Casey Blake has three errors in 11 starts, though none of his errors have affected the game’s outcome.

Here’s a quick rundown of the Dodger errors and their effects this season. In 14 games, the team has made 16 errors, leading to 12 unearned runs. Three of the errors have contributed directly to losses.

10) Casey Blake (3), April 15 vs. Arizona (Game 9, ninth inning)
Error: Arizona leads 4-3 with runners on first and third and one out when Blake mishandles Abreu grounder.
Consequences: Unearned run scores. Dodger reliever Ramon Ortiz called in, needs four extra pitches to get out of inning. Dodgers tie game in bottom of the ninth thanks in great part to a Stephen Drew error, then win in 10th.

15) Blake DeWitt (2), April 21 at Cincinnati (Game 14, fourth inning)
Error: Leading 4-3, runner on first and one out, DeWitt lets potential double-play grounder get past him.
Consequences: One out and one Kuroda walk later, Aaron Harang knocks his controversial single just shy of Andre Ethier’s glove for unearned run.

16) Rafael Furcal (2), April 21 at Cincinnati (Game 14, fourth inning)
Error: Leading 9-4, runner on first and two out, an easy grounder to Furcal somehow gets through.
Consequences: George Sherrill replaces Kuroda and gives up a single that scores two unearned runs. Sherrill uses three more pitches to end inning. Error forced the Dodgers to use an extra pitcher in the game.

Update: The Dodgers have activated Hong-Chih Kuo and placed Jeff Weaver on the disabled list.