And speaking of reunions … 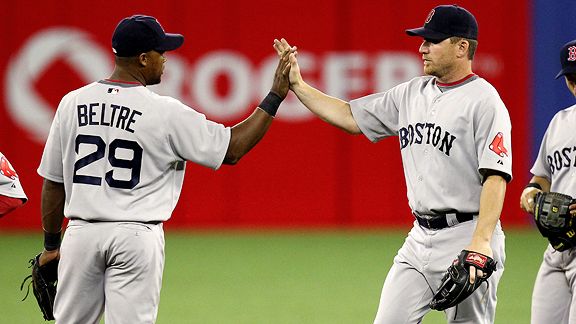 Stacking up against the lefty
Dodgers at Red Sox, 4:10 p.m.

Today in Boston, the Dodgers say a rare hello to former Boys in Blue Adrian Beltre and J.D. Drew.

Moving from Seattle’s pitcher-friendly ballpark Safeco Field to Fenway Park has revitalized Beltre offensively. The third baseman, now 31, has a .374 on-base percentage and .574 slugging percentage, his best numbers since he left the Dodgers. I’m not sure ballpark adjustments entirely account for his improvement from .304/.379 with the Mariners last season.

Drew, 34, has declined so far this year, his OPS falling from .914 in 2009 to .807 while starting 60 of 68 games in right field. This weekend marks the first time he faces the Dodgers since opting out of his contract. Something tells me that Drew would get booed if he ever returned in a visiting uniform to Dodger Stadium, a shame considering his .905 OPS for Los Angeles.

Oh, Manny … that would have been something