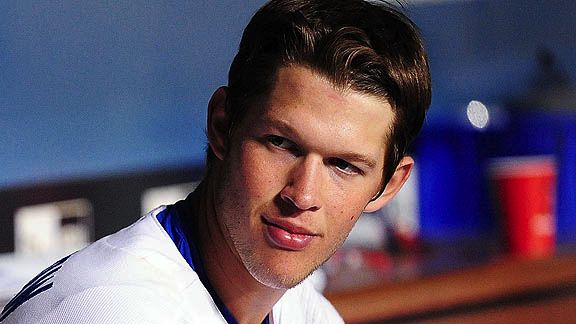 Gary A. Vasquez/US PresswireClayton Kershaw leads the National League in strikeouts per nine innings. His 2.96 ERA is ninth in the NL.

He didn’t make the National League All-Star team, but Clayton Kershaw is the Dodger Thoughts top cog for the first half of the 2010 season.

Andre Ethier, Rafael Furcal and Hiroki Kuroda each had hot streaks, but Kershaw was consistently strong for almost the entire season to date. In 2010, he has thrown 12 quality starts in 18 tries (most of those better than the six-inning, three-run variety) and allowed a maximum of two runs over at least five innings in three others. In only two starts this season has he failed to keep the Dodgers in the game.

After walking 24 batters in his first 30 2/3 innings, Kershaw has even gone a long way toward solving his biggest weakness, walking 26 in his last 81 1/3 innings. It has just been a very impressive first half, and the Dodgers are lucky to have him.

A smooth ride into the All-Star break, 7-0