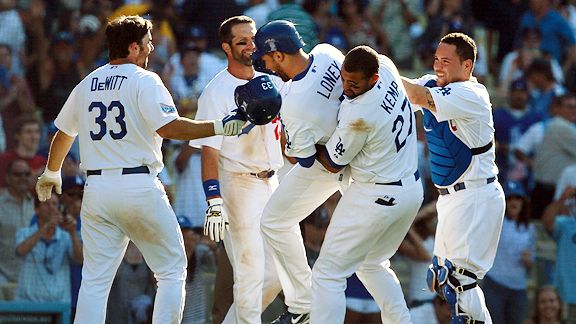 Jeff Gross/Getty ImagesMatt Kemp looks to win the Kendry Who? Award with his takedown of James Loney after Loney’s walkoff homer gave the Dodgers a 3-2 victory over the Mets today in 13 innings. The 21st Dodger used in the game, George Sherrill, pitched a 1-2-3 inning for the victory. Carlos Monasterios pitched five shutout innings. and then after James McDonald disappointed in a two-run sixth, Kenley Jansen’s two-strikeout major-league debut kicked off seven consecutive game-saving scoreless (and hitless) innings of relief for Los Angeles.
Carlos MonasteriosGeorge SherrillJames LoneyKenley Jansen