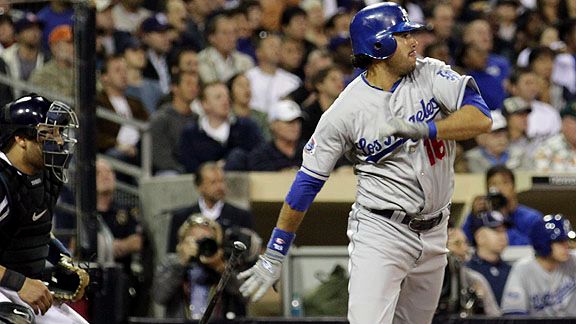 Gregory Bull/APAndre Ethier breaks a scoreless tie in the seventh inning with a two-run, pinch-hit single.

Too sick to start Tuesday’s game in San Diego, Andre Ethier made the Padres feel ill in their showdown with the Dodgers.

Ethier, a late scratch from the starting lineup with the flu, came off the bench in the seventh inning to deliver a two-run single – all the medicine the Dodgers needed to come away with a 2-0 victory.

Chad Billingsley and Jon Garland each pitched shutout ball through six innings, though both starting pitchers had one inning of major tightrope-walking in that time. In the bottom of the fourth, three singles loaded the bases before Billingsley retired the next three batters on a groundout, popout and strikeout. In the top of the sixth, with runners on first and second, Garland nabbed Rafael Furcal, Xavier Paul and Matt Kemp on 3-2 pitches.

But the pivotal moment came in the seventh inning, when Blake DeWitt (on an 0-2 pitch) and Garret Anderson singled with two out. Padres manager Bud Black forced the Dodgers hand, walking Russell Martin (1 for 2) intentionally. That caused Joe Torre to have the flu-stricken Ethier pinch-hit for Billingsley, even though the righty had thrown only 84 pitches. (Billingsley lowered his ERA to 4.00 on the season by extending his scoreless inning string to 15 tonight – remarkably, Dodger starting pitchers have allowed one earned run in their past 43 innings.)

It was an echo of Friday’s game, when Torre pinch-hit for Vicente Padilla despite a low pitch count. But this time, with Garland left in to pitch despite lefty Joe Thatcher warming in the bullpen, Ethier grounded a 1-1 pitch hard, just past a diving Everth Cabrera, driving home the first two runs of the game.

That put the game in the hands of the Dodger bullpen, starting with Hong-Chih Kuo. Despite being interrupted by a single and a Casey Blake error, Kuo struck out the side. After throwing 20 pitches that inning, Kuo came out in the eighth to face Padres slugger Adrian Gonzalez and struck him out on three pitches. He faced Chase Headley, and struck him out on three pitches. He threw two more strikes to Yorvit Torrealba before finally missing, and then gave up a single. On his season-high 34th pitch, Kuo got Will Venable to ground out, taking the game to the ninth.

In the bottom of the ninth, Jonathan Broxton breezed through the first two hitters on three pitches. That brought up his nemesis, Matt Stairs, with a .597 OPS this season. Broxton missed with his first three pitches, but came back to strike Stairs out and bounce off the mound with the save.

First step. The Dodgers were held to two runs or less for the eight time in 12 games since the All-Star break, but they closed their gap in the National League West to five games. Los Angeles remained 2 1/2 games behind San Francisco for the NL wild card.

Juan’s a Dodger, always a Dodger