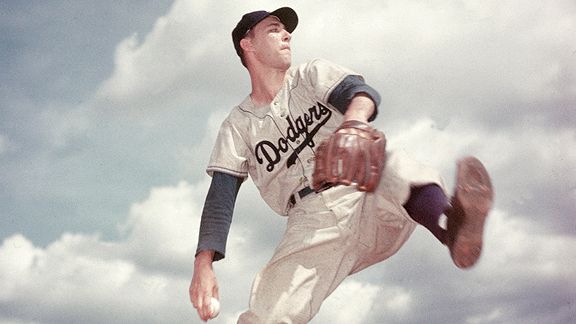 Hulton Archive/Getty ImagesFarewell, Billy Loes. The unforgettable man in Dodger lore pitched had a 3.59 ERA in 1955.

Yesterday’s late scratch of Claudio Vargas due to lower back soreness created an instant ripple effect throughout the Isotopes rotation. Today’s originally scheduled starter Jesus Castillo was forced to pitch yesterday, creating a void that was to be filled by Bobby Blevins. The righthander’s flight through Atlanta from Double-A Chattanooga was canceled, however, putting Blevins’s arrival before gametime in doubt. Enter lefty Cody White, who was summoned from Phoenix where he had been pitching for the Arizona League Dodgers. In his previous stint at Triple-A, White went 3-0 with a 7.59 ERA (18 ER / 21.1 IP) in six appearances, two starts. While reliever Jon Link will get the start (today), White is likely to see action quickly as the reliever’s longest outing this year is two innings.

Ramon Troncoso, by the way, gave up a grand slam in his one inning of work Tuesday for the Isotopes.

Hiroki Kuroda is the subject of a nice profile by Andy Kamenetzky of ESPNLosAngeles.com.