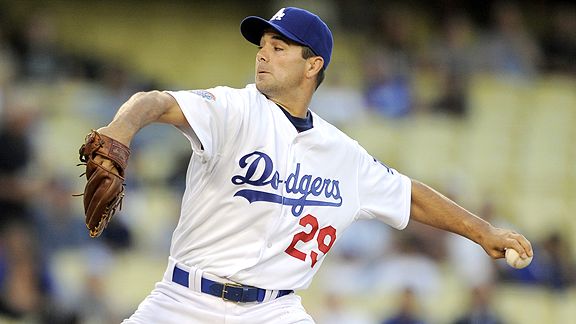 I’m trying to think of the last time someone made me look as bad as Ted Lilly and his 1.29 ERA as a Dodger have. Not sure anyone has done it quite like this since I’ve been doing Dodger Thoughts. Maybe someone during my woebegone dating adventures of the 20th century? Or maybe I have to go all the way back to the time in grade school I challenged Brad Saunders to a tennis match and he waxed me, 6-0, 6-1 (and that 1 might have been charity).

Anyway, it wasn’t like I thought Lilly would be bad, but I certainly never dreamed he would be this good. I tip my embarrassed hat to him.

Reed Johnson’s two-run homer, his first of the season, gave Lilly the chance at the win.

The NL West leaders filled out their rotation from within, after all