In Other teams, Transactions 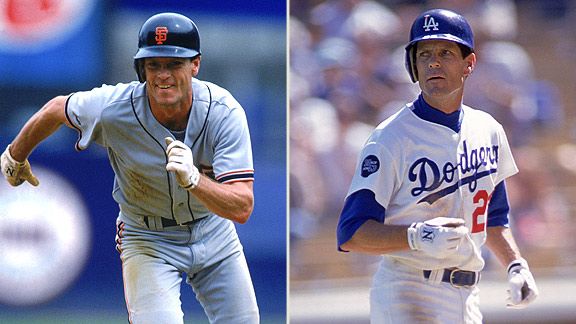 Getty Images“He was sentenced to be my Butler.”

Juan Uribe is poised to become the 47th player to wear both a Giants and Dodgers uniform since 1988, according to Baseball-Reference.com via ESPN Stats and Information (which also provides this analysis of the Uribe signing).

Though signing ex-Giants might seem a Ned Colletti fetish, the players have been going between the two teams in a relatively steady stream over those past 22 years, with hardly a moment, if any, in which at least one player on one team hadn’t at one time played on the other.

If you’ll allow for the somewhat subjective characterizations below, you’ll find that the Giants and Dodgers have had similar success (or lack thereof) with transplants. The number of players who have made relevant contributions to both teams is only five (and that includes Matt Herges and Marquis Grissom as “relevant”). Conversely, nearly half of the players on this list have been pretty much meaningless for both teams.

By the same token, the number of players going from relevancy with one team to irrelevancy with the other, or vice versa, has been practically equal.

If there’s any sort of noteworthy differential, it’s been that the Dodgers have been more likely to make an irrelevant Giant fill the same role in Los Angeles. I mean, really – 15 of these guys?

Anyway, I’m more than a bit concerned that Uribe will become relevant-Giant-turned-irrelevant-Dodger No. 9, but Dodger fans can hope for the best.