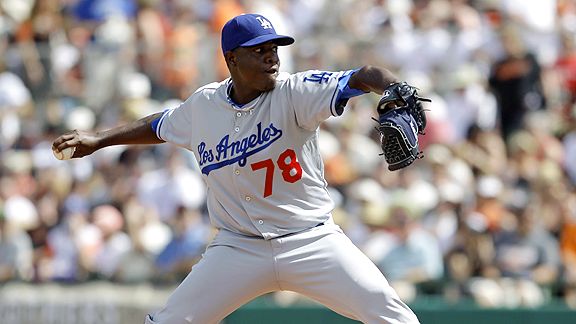 Just as there’s no denying how meaningless Spring Training performances generally are, there’s also no denying how much fun it can be when you see a top prospect excel. Has there been a better March memory this century than Clayton Kershaw’s Public Enemy No. 1 from 2008? (It helps when you have Vin Scully documenting it.)

Though it’s hardly been the best of Dodger Spring Trainings in 2011 (albeit one devoid of controversy), the organization’s reigning players of the year have far from disappointed. Jerry Sands was red hot at the plate in the early going, and now there’s pitcher Rubby De La Rosa, who fired four no-hit innings in a start against San Francisco today.

De La Rosa walked three (his first free passes of the spring) and struck out two. In exhibition play, the player who will become the centerpiece of the Dodgers’ 2013 “Rubby Tuesday” marketing campaign has thrown 10 innings and allowed seven baserunners while striking out seven and posting a 1.80 ERA.

De La Rosa will start the season in the minors, but will we have to wait until 2012 for his arrival? If he can pitch consistently into the summer, maybe not …

However unrealistic (at least in the short term), it’s fun sometimes to just tune out the noise and think about guys like Sands and De La Rosa as potential saviors.

A has-been’s and never-was’ perspective of Camelback Ranch