A has-been’s and never-was’ perspective of Camelback Ranch 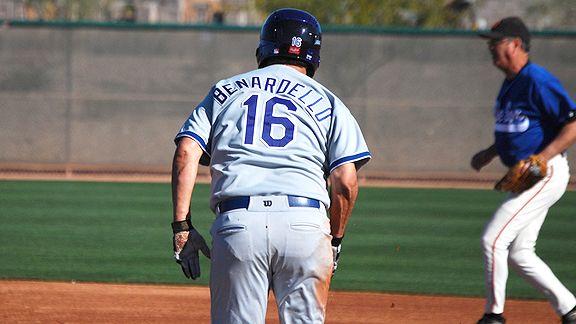 Courtesy Joe BenardelloOff to the races …

I had the good fortune of recently playing in a three-day baseball tournament, “The Rumble at the Ranch,” held on the Dodger minor-league fields at Camelback Ranch from January 21-23: three days, five teams, four games and nearly an infinite amount of fun.

When I heard that West Coast Fantasy Baseball was holding the “The Rumble” at Camelback for the first time and that my over-30 league, Dodgertown West, was sending a team to compete against teams of Giants, Padres, Cubs and Blue Sox, I just had to go.

While getting ready to leave for the trip, I was play-acting the part of the professional ballplayer in my head, so to take it a step further, I booked a black Town Car to take me to the Burbank airport. This was to be my ride driving me to the airport to start Spring Training. The self-induced delusion of being a “real” ballplayer would happen time and again throughout the weekend and provide me with an endless amount of fun.

It’s a short hop to PHX, and yet something ridiculously perfect happened as I retrieved my bags. I had checked two bags, my baseball bag and my luggage, and while I waited at the carousel the crowd thickened around me. My bat bag came first, heavy and full, and when I picked it up and dropped it you could hear the sweet sound of four wooden bats banging on and off each other, this baseball bat melody was caught not only by my ears. Nearby I could hear a couple talking about me: The wife asked him in a hushed voiced if I was a player or maybe a coach, and further asked “isn’t about time for Spring Training to start?” Intoxicated by what I was hearing, made drunk again by my fantasy, I hoisted my heavy luggage as if it weighed nothing and walked away with the casually confident gait of an athlete … or at least I tried.

I got to the park about 90 minutes before game time. I must have been looking at the GPS screen as I was driving, because popping up out of nowhere was Camelback Ranch, nestled right in the suburbs as if Dodger Stadium was built in the middle of Reseda. I turned into the complex and followed the signs that led to the players parking. I was wholly struck by the beauty of the place, the low-slung lines of modern desert architecture, a rusted earthen palate of natural tones. I wanted to live there as soon as I saw it, I wanted to move in before I ever stepped inside.

I stood there in the parking lot, rumpled from sleep, wearing sweats and dragging my gear bag, not sure where to go. Noiselessly a golf cart pulled up beside me, “Who do you play for?” was the question I was asked. “Dodgers” I replied, and could not help but smile. The fella in the golf cart pointed me toward a door as he turned the cart and speed away.

“Visitor Locker Room A” the sign read at the door. Sweet, the major-league locker room! The door opened to a longish hallway, with doors to the training tables immediately to the right, and in front of me at the end of the hall was a snack display that had all a ballplayer would ever want. Red Vines and bubble gum, candy bars and bags of chips, just in sunflower seeds alone there were four different flavors: Plain, BBQ, Ranch and Dill Pickle, which is better than you’d probably think. 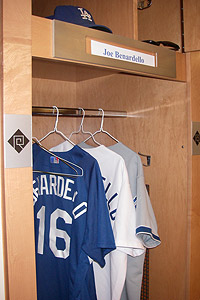 I looked around the place with my mouth agape; the big-league treatment was far better than I expected. This only furthered my imagination as my delusions became supported by all that I was seeing. In the corner, closest to the showers, prime location, there it stood, my locker, my nameplate, all in Dodger blue. I sat in my chair and it felt like I had arrived.

One by one, my teammates filtered in. Our roster had a nice mix of three guys right around 30 years old, five of us ranging from late 30s to early 50s, and three more old timers in their late 50s to early 60s rounding us out. You’d think that you couldn’t play with such a wide age diversion, but it works, it’s competitive and a heck of a lot of fun.

The Dodgers’ Camelback staff were awesome; they came in to check on us and told us to track them down if they could help us in any way. Excited to get the field, I lathered on Atomic Balm followed by some sunscreen, I popped four anvils to chase away Father Time, quickly dressed into my Dodger whites and ran out the door.

I’ve been to Dodgertown in Vero Beach, I have stayed in those motel-like bungalows that were inhabited in years past by the likes of Garvey, Cey, Russell and Lopes, I have played in Holman Stadium, I have slid in Maury’s pit and sat on Campy’s corner, I have heard my spikes on the concrete and asphalt at the corner of Vin Scully Way and Jackie Robinson Boulevard. All this to say, I love Vero Beach, I love the history, I love the name, I love everything about it and what it stands for.

As I rode in the golf cart through the Dodger side of the complex, I got my first good look at Camelback Ranch. Camelback is no Vero, but then again Vero is no Camelback. Vero has all the charms and challenges of an aging summer camp, an implied playfulness of swimming pool, tennis courts and horseshoes; it is dated and comfortable but not really luxurious. Dodgertown at Vero Beach was built was built for an era gone by when the players lived on-site. 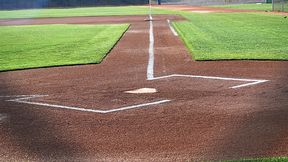 Camelback by comparison is less charming, more businesslike, but maybe more beautiful. The landscaping is breathtaking; it has the feel of an exclusive desert spa. There are no bungalows for the players to bunk in: You are meant to come to work, punch in and punch out. I find this a little sad, but by no mean an indictment on the site, more of a sign of the times.

Baseball, finally baseball. I dropped my junk in the dugout, put on my spikes, stuff gum and seeds into my pocket, run and stretch and throw a little too. The guys from both teams got together and took some batting practice. I was a little worried about my swing coming into this tournament; I hadn’t swung a bat since early December. Two cuts in the cage and I immediately started spraying line drives everywhere, guys hooted as I banged the ball from gap to gap. I left the cage with a goofy grin plastered on my face. Unfortunately, those batting practice cuts would prove to be the best swings I took all weekend.

The fields at Camelback are immaculate, better even than they were at Vero – they are the finest surfaces on which I have ever played. The grass is short, fast, yet soft and supportive, and the infield dirt is without a pebble. Every hop I got was pure and true; I didn’t see a ball all weekend that betrayed the fielder; for us has-beens these good hops sometimes left us without excuse.

We ended up tying for first place in the tournament with a record of 4-1. Our pitching was incredible all weekend; we threw strikes and kept the other team off balance. I went a misleading 7 for 15 with a walk; I say misleading because I didn’t get an extra base hit all weekend I beat out a couple of infield squibblers that could have been outs if I had only hit them harder, and I struck out with the bases loaded after being up in the count 3 and 0. Still not over it … 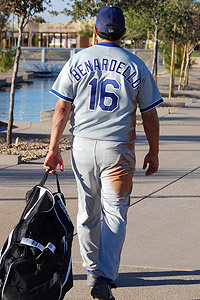 Some of the best memories of the weekend included playing the Lodi Giants and being a part of a baseball field filled with Giants and Dodgers, wearing the uniforms of armies long at war (we won 6- 2!). There was also a time when we were wandering around with time to kill and found ourselves in the Dodgers major-league clubhouse. I am sure that we were not supposed to be there, but experience has taught me that being where you shouldn’t be can be fun. The major-league lockers, the big chairs overlooking the stadium, the batting cages and pitching area right out back … yeah, I was dreaming a bit.

Time spent in our locker room let the familiar fantasy of major league player wash over me again and again, especially as I threw my dirty uniform into the laundry cart. The laundry service doesn’t seem like much, but goes a long way for the big-leaguer experience: Throw your dirty clothes in a pile and the next morning they magically appear clean in your locker.

After each game we sat at our lockers, popped open beers and talked about baseball. Our jokes were harmlessly cruel, just the way we like them, the laughing was nearly as good as the baseball. After our doubleheader on Saturday, I nearly feel asleep in the shower, swaying under the hot streams with a cold beer in my hand. I didn’t want to get out, so I called for another beer, and stood there stewing and drinking and making sure I remembered it all.

If this sounds fun to you, a teammate and good friend of mine, Mark Stone (“Stoney”) is re-launching the fantasy camps at Vero Beach staffed with former Dodger legends like Branca, Wills, Monday, Reuss, Yeager and others. It is an incredible experience no matter what your baseball skill level is – I guarantee you memories to last a lifetime. For more information check out www.LADABC.com.