Ivan DeJesus Jr. likely to start at second base while Blake is out 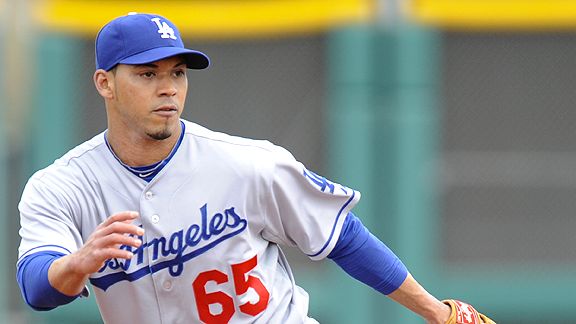 “Barring an injury,” writes Tony Jackson of ESPNLosAngeles.com, “infielder Ivan DeJesus looks like a strong bet to make the club and remain in the big leagues until Blake returns from back injury. DeJesus, who will be making his major league debut, likely will get the bulk of the starts at second base during that time, while Juan Uribe will move to third.”

It’s a pretty impressive feat for the infielder, who has remaining options, who had to come back from a 2009 broken leg and was even said by some to be in the Dodgers’ doghouse last year.

Jackson also writes that the Dodgers will carry four starting pitchers on their Opening Day roster, and will call up a fifth starter from the minors April 12. That pitcher figures to be John Ely, especially if Tim Redding’s back ailment today proves to be serious. Jackson:

… Redding returned to Camelback Ranch, the team’s spring-training complex in Glendale, for further examination. No diagnosis or prognosis was immediately available. …

The season opener for Triple-A Albuquerque isn’t until April 7, so whomever the Dodgers choose to start in place of Garland could start that game and then be perfectly lined up to pitch for the Dodgers on April 12 in San Francisco. …

Navarro likely to be out until May

Joey from the Block