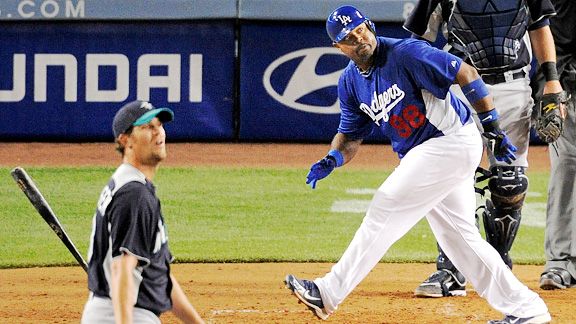 The Dodgers are expected today to make official the callup of Russ Mitchell to take the place of Casey Blake, who is suffering from an infection in his elbow. The Dodgers could have gone another way by turning to a guy you probably first heard about in Spring Training – if you heard of him at all – Corey Smith. Here’s the why and why not:

All that being said, I’d kind of like to see Smith get the shot – partly for sentimental reasons, partly because I wouldn’t mind seeing what appears to be a bigger offensive threat off the bench. Mitchell also has home run potential, having hit two in his September 2010 promotion last year (while going 6 for 42 overall). But on the theory that the Dodgers will probably continue to start Aaron Miles at third most of the time until Juan Uribe returns, I’m not too worried about Smith’s lack of play at the position this season.

An even more radical decision by the Dodgers would be to call up outfielder Trayvon Robinson, who has started nicely in Albuquerque this year except when you consider his strikeouts, and make Jerry Sands the emergency third baseman. But I’m sure you can see the pitfalls with that …

Anyway, this will probably all be moot by gametime, but I just thought I’d think out loud about Smith.

Blake heads to DL, Loney sits, but Uribe back in lineup