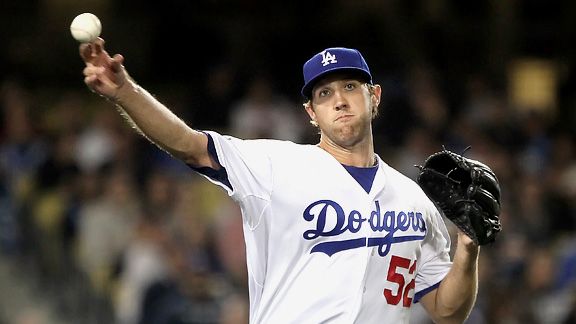 There’s Matt Kemp at No. 1, undisputed and glorious. There are Clayton Kershaw, Hiroki Kuroda, Andre Ethier and Jamey Carroll having seasons that, despite some inconsistency, you don’t need to be ashamed of.  There’s an increasingly competent Ted Lilly, and a tip of the hat to Aaron Miles.

And then, the morass.

Playing time, on a cumulative basis, is one of the factors I’ve used in my Dodger Cogs and Dogs rankings, but as I tried to figure out how to fill out just the top 10, nothing made sense anymore. So I decided to blow things up a little.

I pushed the new kids, who came late to the 2011 Dodgers but who are providing most of the energy to this team and most of the reason to watch, into the upper echelon. That means Rubby De La Rosa at No. 8, despite only 15 innings (occasionally wild) this season. That means Dee “Roadrunner” Gordon and his 36 plate appearances without a walk at No. 9. That means young relievers Javy Guerra and Josh Lindblom, with their combined 21 1/3 career innings, at No. 10 and No. 11.

And then Casey Blake, Rod Barajas and James Loney, who have all played more and made contributions here and there, but had too many issues for me to feel good about having them in the top 10.

Dodger Cogs and Dogs has always been subjective, and perhaps never more so than today. But at least I wasn’t left aching as I completed the task.

Before we proceed to the rankings, one final note …

Broxton should be back with the Dodgers in a few weeks, with what figures to be about three months left in his Dodger career. I know he’s let a lot of people down, and with the way the Dodger fortunes have unfolded since 2010, his postseason mistakes haunt us more than ever.

His career might have gone into reverse, but it’s not as if there wasn’t excellence there. Call him one-dimensional if you want, but what a dimension.

No, this doesn’t mean everything, but like his dominance for much of his career before last summer, it means something.

When he comes back, is there any way, any way at all, that Dodger fans might not boo Broxton every time he touches the ball?

One more thing. In case you thought customer service was dead at Dodger Stadium, here’s a great story from Evan Bladh at Opinion of Kingman’s Performance.