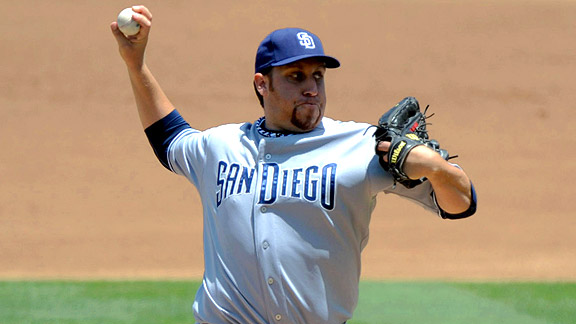 Twenty years ago this month, Montreal pitcher Mark Gardner no-noed the Dodgers for nine innings before losing the game on three hits in the 10th, 1-0.

Three years ago in June, the Dodgers defeated the Angels without ever getting a hit at all. 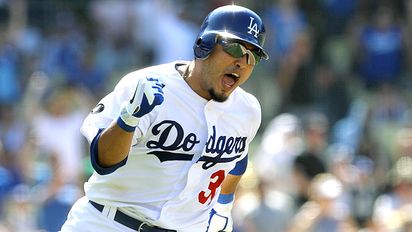 Today, the Dodgers came so close to duplicating one of those scenarios, then wrote a third. No-hit for 8 2/3 innings, the Dodgers got back-to-back hits by Juan Uribe and Dioner Navarro for their third straight shutout victory, 1-0.

The Dodger pitchers’ 27-inning scoreless streak is the best in the majors this season, and they have three consecutive shutouts for the first time since 1991.

Padres righty Aaron Harang, coming off the disabled list today for his first game in one month, threw six no-hit innings, walking three and striking out six on 95 pitches. After Harang left, the Dodgers threatened to score on San Diego’s bullpen thanks to errors and walks in the seventh and eighth innings, each time getting runners to first and second. But the five hitters who batted with the runner in scoring position went 0 for 5.

Rubby De La Rosa himself took a no-no past the fourth inning for the second time this week, with Cameron Maybin’s fifth-inning knock the only one against the Dodger rookie in six innings, during which he struck out a career-high eight while walking four on 98 pitches. Matt Guerrier, Mike MacDougal and Blake Hawksworth followed with perfect innings, taking the Dodgers into the bottom of the ninth.

And after Luke Gregerson struck out Matt Kemp, you could feel this game rolling straight into extra innings. But with one out to go before the no-hitter went into extra innings, the high-average bat of Uribe laced a double over Chris Denorfia’s head in left field.

And then, none other than Navarro and his sub-.180 batting average drove home Uribe with a gapper to right-center to, yes, win the game.

Crowd control: Before near no-hitter, fans stay away