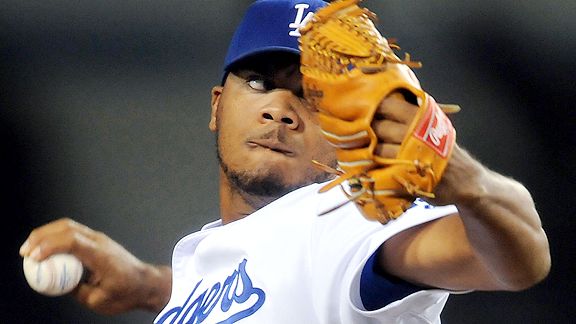 This is a good time to wonder if the Dodgers will reach the magic number of 50 players in a season. It’s only happened twice in Los Angeles Dodger history: 53 players in 1998, and 50 players in 2006. Last year’s team fell one player short, finishing at 49.

Juan Rivera became the Dodgers’ 44th player this season. Trayvon Robinson is sure to get a promotion before season’s end. Can they get five more? Others who might be candidates, as rewards for fine minor-league seasons, include pitchers Dana Eveland and Nathan Eovaldi and first baseman-outfielder Scott Van Slyke. (Each would require a 40-man roster move, but that’s doable.)

But to get to 50, the Dodgers will probably have to be involved the trade market. For example, if Hiroki Kuroda were sent somewhere, they might get a prospect who would get a look in the majors, or create an opening for Eveland. If Jamey Carroll were traded, that could open the door for Justin Sellers before season’s end.

In short, 50 is reachable, but the Dodgers are gonna have to want it. Do they want it? Do they feel lucky? Well, do they, punk?

Reminder: The Dodger Cogs and Dogs rankings are a mixture of subjectivity and objectivity and encompass season-to-date major-league performance, not what they’ve done lately. And it’s still really hard to do these days.