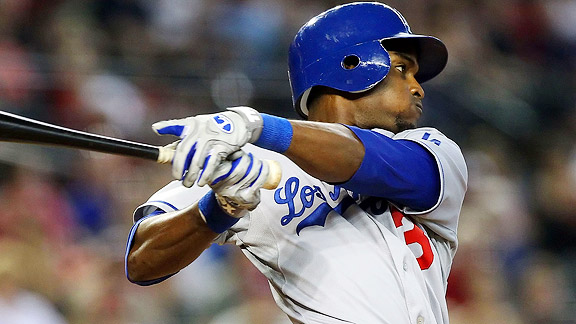 Eugenio Velez gets the star treatment in this month’s edition of Dodger Cogs and Dogs.

Velez, as you’re probably aware by now, is threatening to have a historic season. He is 0 for 21 as a Dodger. Only three players in Dodger history have ever had more at-bats while registering a .000 season: outfielder Jose Gonzalez (28 in 1991, before he was sent to Pittsburgh) and pitchers Sandy Koufax (26 in 1957) and Brett Tomko (24 in 2007).

Now, Velez is a career .247 hitter, so the idea that he will go the final seven weeks of the season without a hit remains remote. So the hope is that he would get released right after breaking the record, but the continued injury problems of Dodger infielders seem to be preventing that (not that he shouldn’t be released anyway).

Nevertheless, hope remains that Velez will set a futility record before he’s done as a Dodger. Former Brooklyn catcher Bill Bergen has the longest streak of hitless at-bats by a non-pitcher, 46 – that’s the record that Milwaukee’s Craig Counsell recently threatened. What you might not realize is that Velez went hitless in his final nine at-bats as a San Francisco Giant last year, which means he’s 0 for his last 30. That puts him within flailing distance of Bergen.

As always, the ratings below are a combination of subjectivity and objectivity. And as has been the case for the past few editions, a dose of impatience as well.

‘Another day older and deeper in debt’