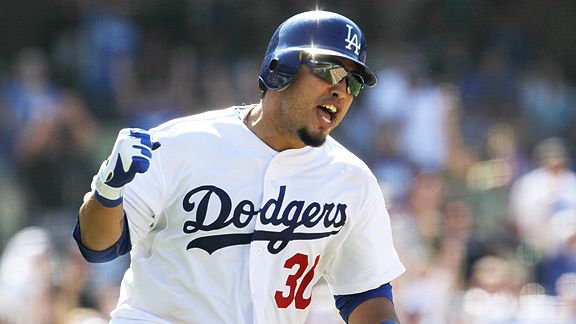 The setup: The Dodgers’ pre-Russell Martin hope for the future at catcher, Navarro was traded in 2006 with Jae Seo to Tampa Bay for Toby Hall and Mark Hendrickson.  He was 22 with a .759 OPS, but Ned Colletti found him expendable, thanks most apparently to concerns about his defense and excitement over Martin’s impressive debut. Coming back from a host of personal challenges, including near-death experiences for himself and his family, Navarro made the 2008 American League All-Star team but couldn’t break .600 in OPS the following two seasons, the last of which (2010) ended with his acrimonious exile from the Rays. It was not too much of a surprise that Colletti offered Navarro a return engagement in Los Angeles, but it was when Colletti guaranteed $1 million in the process.

The closeup: In the final week of Spring Training, Navarro suffered an oblique tear that kept him out until April 25, at which point he delivered a 2011 performance best described as sad, but not without its moments. He homered in his fourth game, went hitless in his next 18 at-bats, then had a 7 for 16 hot streak that included a walkoff RBI single in a 3-2 victory over Florida on May 27. (Don Mattingly had Navarro pinch-hit 10 times between May 14 and July 3; that was Navarro’s only hit.)

Strangely, three times Navarro had the only RBI in a 1-0 victory, making him only the second Los Angeles Dodger to accomplish such a feat in one year. He hit a game-winning homer in the bottom of the eighth June 19 against Houston. He hit a gapper to right-center to drive home Juan Uribe on July 9 after the Padres had no-hit the Dodgers for 8 2/3 innings. And he hit a seventh-inning homer into McCovey Cove off Tim Lincecum, of all people, to give Clayton Kershaw a 1-0 win at San Francisco on July 20. Pretty amazing for a guy who had only 34 hits and 17 RBI all year. He also had some defensive highlights: On June 24, he became the first catcher with two pickoffs and two caught stealings defensively in the same game since 1986.

With Rod Barajas having his own injury woes, Navarro actually racked up some playing time – 188 plate appearances between May 14 and August 21. But with barely a week to go before rosters expanded, the Dodgers cut Navarro loose on August 23, amid reports that his professionalism was seriously lacking. He finished his second Dodger career with five home runs, a .276 on-base percentage and .324 slugging percentage.

Coming attractions: Navarro will still only be 28 next year, but he’s going to have to earn his way into a major-league contract if he wants one, probably through a non-roster invitation to Spring Training.

Scoping out the NL West