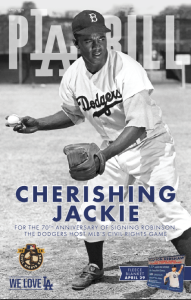 Jackie Robinson Day has been one filled with baseball royalty, fond reminisces and earnest discussion of challenges yet to be met.

But the lingering memory from April 15, 2015 will be that this is the day the Dodgers announced they would erect a statue to honor Jackie Robinson at Dodger Stadium.

Details about placement, timing or design are not yet available, but the commitment was a most welcome piece of news.

In making the announcement, Dodger president and CEO Stan Kasten said that the statue would be the first of a series at Dodger Stadium. The news just keeps getting better.