This is the first episode of Word to the Weisman that I’ve posted in more than a year, so check it out. You can also get it on Apple, Spotify, etc.

END_OF_DOCUMENT_TOKEN_TO_BE_REPLACED

If we had somehow forgotten, Wednesday’s World Series finale between the Cubs and Indians, an instant classic that will be revisited for generations to come, reminded us of why we invest in a team not only over the course of a season, but of seasons.

Today, on the first day of the rest of our offseason, Dodger Stadium killed us with its kindness, with its beauty, with its perfect backdrop for one day more of baseball, if baseball could only just oblige.

For now, our days and nights turn to other things. So the ballpark waits, patiently, for next year to arrive.

Dodger Stadium settles in for winter

In Dodger Stadium, Thinking out loud

The baseball park can hold close to 60,000 bodies, but it is eerily empty in the days after the Dodgers lose out on a chance to advance to the World Series race for the first time in 28 years. Another race is going on in the country — one of the bitterest presidential bids in U.S. history — yet none of that seems to matter in these parts. Chavez Ravine is a sleeping giant — no, not quite asleep; it is in a deep and sullen state, painfully aware that its soul is gone — the crowds, the roar, the hope — while its body is one great hull of a thing that must stay put until another season. It hibernates in the open, all blue and golden in its loneliness, picked on by laughing ravens and overlooked by helicopters flying over the open mouth of the stadium … to somewhere else.

END_OF_DOCUMENT_TOKEN_TO_BE_REPLACED

High above the champagne party in the Dodger clubhouse, the booth sits empty now. And yet it feels so full.

Vin Scully clocked in at Dodger Stadium for the final time today, a day that encapsulated so much of what made him baseball’s premier voice.

END_OF_DOCUMENT_TOKEN_TO_BE_REPLACED

Vin Scully had a surprise for Dodger fans — his own personal rendition of “Take Me Out to the Ballgame” at the seventh-inning stretch. This one’s a keeper.

All the feels. #VIN pic.twitter.com/KB5a8wSpJ2

The evening features panel discussions with current and former Dodger players, coaches and executives. Guests will also have the opportunity to take batting practice in the Dodger batting cages, pitch in the Dodger bullpen, tour Dodger Stadium, call play-by-play action on historic Dodger moments, take photos throughout the stadium with Dodger alumni and enjoy a dinner on the infield.

Click here for more information or to purchase tickets.

In honor of Vin Scully’s 67th and final year announcing the team’s games, the Dodgers have nominated Scully’s Top 20 calls of all-time. Now, it’s up to you to rank them.

Go to dodgers.com/vin, where you can play videos to hear all 20 calls — and then drag and drop them in order of your preference. Voting takes place through August 12.

The Dodgers will begin revealing the order of the Top 20 on August 13, starting a countdown that will end with the announcement of the fans’ choices for his top two greatest Dodger calls on Vin Scully Appreciation Night, September 23.

A landslide of emotion for Vin Scully at LADF gala

Stevie Nicks said she was backstage Thursday during the Los Angeles Dodger Foundation’s Blue Diamond Gala when she began to think about time. Nicks started performing with Mick Fleetwood nearly 50 years ago, and the years were something to contemplate.

And then her thoughts turned to Vin Scully, the night’s honoree whom the members of Fleetwood Mac met before their performance began, and his 67 seasons of service to the Dodgers, and she was blown away.

Nicks then dedicated the ballad “Landslide” to the Dodgers’ Hall of Fame announcer.

Well, I’ve been afraid of changin’
‘Cause I built my life around you
But time makes you bolder
Children get older
I’m getting older too

END_OF_DOCUMENT_TOKEN_TO_BE_REPLACED

What else, but ‘The eagle has landed’

National attention fell on the apparently rogue eagle that preceded Yasiel Puig’s second-inning fly ball over the center-field fence at Dodger Stadium on Independence Day, but rest assured, Chinook is safe at home.

@Dodgers Happily, our bald eagles are fine + safely back at the Zoo. Although he missed his mark, Chinook waited by the van for his trainer 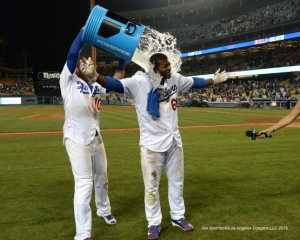 END_OF_DOCUMENT_TOKEN_TO_BE_REPLACED

Flags flew at half staff Thursday at Dodger Stadium in tribute to the victims of the mass murder early Sunday morning in Orlando. Before Thursday’s game, Vin Scully led those in attendance at Dodger Stadium into a moment of silence. Here is the text of what he said: