A Giants-Dodgers series without Kershaw, Greinke, Bumgarner … or shutouts?

Are there stakes for the Dodgers tonight? Sure. It’s a game against the Giants, their top rival both spiritually and in the 2015 National League West standings.

But what seems to be more at stake for the Dodgers is their self-esteem.

After tallying only seven runs in their four games this week against Texas and requiring a walkoff balk to salvage any sunshine, the Dodgers enter tonight trying to escape an even darker cloud.

According to Stats LLC (via the Dodger PR department), Pittsburgh shut out the Dodgers for 33 consecutive innings from September 26, 1967 through April 15, 1968. The Giants have two 31-inning streaks against the Dodgers, one in 2012, the other current.

While the Dodgers avoid Madison Bumgarner this weekend, they do begin this series against Chris Heston, who 10 days ago no-hit the Mets with no walks and 11 strikeouts.

To reverse the tide, the Dodgers have taken certain steps that might or might not have an immediate effect. For the first time this year, Don Mattingly has placed Yasiel Puig, who has a career .387 on-base percentage and .386 in the leadoff spot, and Joc Pederson one and two in the batting order. The move (which puts Pederson 57 percent of the way toward fulfilling my March prophecy for him)— also has the domino effect of Justin Turner batting third tonight.

Prediction: @yungjoc650 starts in seven different spots in the batting order during the 2015 regular season.

“Just moving pieces,” Mattingly said. “Really the main thing I wanted to was flip Yas and Joc to see what that looks like, and from there Justin fits into the No. 3 spot, so you split (left-handed hitters) Joc and Adrian.”

Though he didn’t discount the possibility that the new order could provide a spark, Mattingly isn’t counting on it to do so. He maintains that the key for the Dodger offense is to fight for good at-bats — easier said than done. On this subject, he spoke at length. 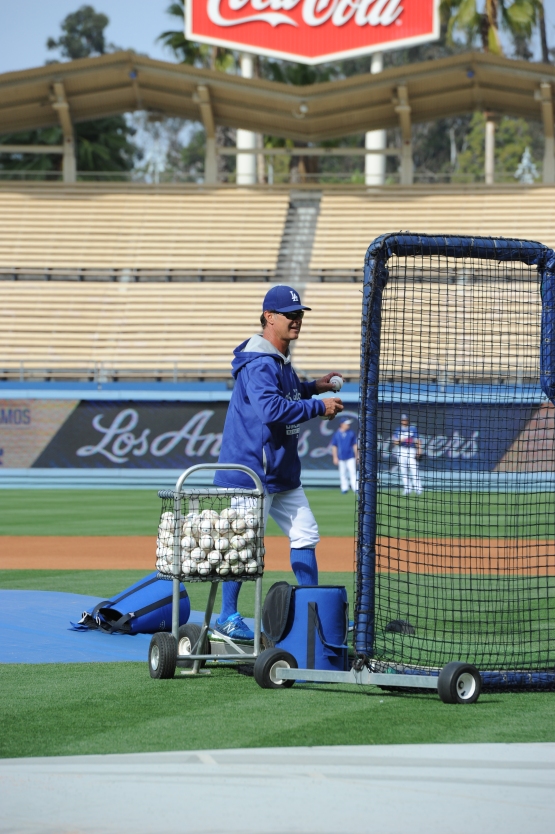 “Everybody can study,” Mattingly said. “We can all look at tape and say, ‘This is what this guy can do.’ Execution is hard. That’s why it’s the Major Leagues. These guys can make pitches, they can keep the ball at the knees. This guy tonight obviously threw a no-hitter, and the Mets know the same thing we know. We’ve got to get him up in the strike zone; we’ve got to try to keep him on the plate. But if he’s throwing strikes at the knees and continuing to do that, then he works off of that same spot and it makes it tough.

“A good at-bat could come from having a game plan, which always helps to know what you want to do with the guy, but (also) being able to execute — getting yourself into counts that you like — and being able to be disciplined to stay with what you believe in and what your plan is. A lot of times, guys will have a plan, and then (the pitcher) throws strike one, and next thing you know we’ve abandoned ship and gone onto a different plan. And then you just end up in trouble.”

But Mattingly, who is nothing if not a student of hitting, says the shift can be subtle — “a slow deterioration,” as he put it.

“Obviously, we haven’t been able to score consistently (lately),” he said. “Not really putting together rallies, even having chances. That’s where you really start to notice it, that you’re not even giving yourself chances.”

At the same time — and I know people hate to hear this — it really could be that the Dodgers just haven’t had good luck.

Below is a list of every Dodger at-bat with runners in scoring position from the seven games in question — the shutout smothering in San Francisco last month, and the four games vs. Texas this week. Here’s what I find:

I mean, come on. Some of that is no doubt making less than ideal contact, but some of it also has to be luck that is likely to change.