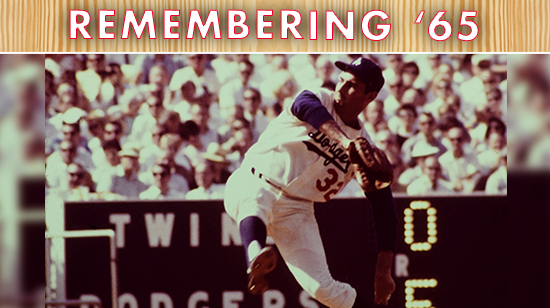 Next to the World Series title, 1965 will always be remembered most by Dodger fans for Sandy Koufax’s perfect game. In fact, Los Angeles came within a hair of having four no-hitters that season — including two one-hitters that took place 50 years ago this week.

First, on May 25, Don Drysdale pitched the only one-hitter of his career, in which he allowed a leadoff single to St. Louis outfielder Curt Flood and then was perfect the rest of the way in a 2-0 victory. The only other Cardinal to reach base was Dick Groat, who got aboard courtesy of shortstop Dick Tracewski’s fifth-inning error.

That game was scoreless until the bottom of the eighth, when Drysdale led things off for the Dodgers with a single and later scored on Ron Fairly’s two-out, two-run double off Bob Gibson.

Next came June 17, with Claude Osteen on the mound for the Dodgers against the Giants. It didn’t immediately have the makings of greatness — Osteen walked two in the first inning and allowed a single between short and third by San Fernando High grad Jack Hiatt in the second inning. But though he would walk three more, Osteen was otherwise perfect the rest of the way, retiring the final 11 San Francisco batters in a 3-0 Dodger victory.

As with Drysdale, this was the only one-hitter for Osteen in the big leagues.

Three days later — 50 years ago today, and one day after 24-year-old Nick Willhite and Ron Perranoski combined on a five-hit shutout — we get to the master. Koufax, of course, had pitched no-hitters each of the previous three years, so anticipation was high anytime he took the mound.

Facing the Mets, the great lefty retired the first 10 batters, striking out five, before .205-hitting second baseman Bobby Klaus drew a walk to spoil the perfect game. Koufax retired the next two batters, but in the following inning with one out, Jim Hickman took Koufax to the Left Field Pavilion, spoiling the no-hitter and the shutout — not to mention giving New York a 1-0 lead.

Koufax would also walk Chris Cannizzaro in the fifth before striking out opposing starter Warren Spahn, the first of the final 13 Met batters in a row that went down. With Fairly once again playing the offensive hero thanks to his two-run double in the seventh, the Dodgers squeaked out a 2-1 victory in an hour and 52 minutes.

Koufax struck out 12 in the second of his two career one-hitters, the first coming in 1960.

If that weren’t enough, Osteen came back the next day in his next start and took a no-hitter into the seventh inning, before Joe Christopher bunted (yep) for a single. Osteen was still carrying that one-hitter into the ninth inning of a scoreless game.

“Like a thunderbolt, Billy Cowan belted his first homer of the season to break up a tremendous twirling duel between Osteen and the New York gamecock, Al Jackson,” wrote Finch. “Left fielder Jim Gilliam hardly stirred as Billy’s drive soared over his head and into the seats.”

Jackson, who as 2-9 with a 5.82 ERA entering the game, pitched a three-hit shutout for the Mets in the 114-minute contest.

A little more than 10 weeks later, Koufax would go everyone, including himself, that extra bit better.

A Giants-Dodgers series without Kershaw, Greinke, Bumgarner … or shutouts?

Dodgers get fresh arm in bullpen in Matt West