It was more death by paper cuts than a single crushing blow, but sadly for fans of the Dodgers and history, Zack Greinke’s consecutive scoreless inning streak ended in the third inning against the Mets today at 45 2/3 innings.

After retiring the first six hitters of the game, Greinke hit Kirk Nieuwenheis with an 0-1 fastball to start the bottom of the third. Catcher and No. 8 hitter Kevin Plawecki then lined a 1-1 fastball to center field, which — in a key moment — Joc Pederson bobbled trying to backhand for an error that allowed Nieuwenheis to reach third base with nobody out.

The Dodgers played the infield in at the corners, and pitcher Jacob deGrom hit a chopper to first baseman Adrian Gonzalez. Gonalez fired home, but Yasmani Grandal’s tag on Nieuwenheis was a hair late.

At first, it looked like this might invite the classic umpire reversal that benefited both Don Drysdale and Orel Hershiser in their streaks. But there was no doubt looking at a replay about the call.

Despite the error, the run was earned. Assuming that Nieuwenheis would have remained at second on the Plawecki single, you also have to assume he’d go to third base on deGrom’s grounder. Subsequent fly balls by Curtis Granderson and Ruben Tejada could have scored him. Of course, we’ll never really know what happened, but that’s how it goes down officially.

Some might blame Pederson, but my guess is that Greinke blames himself for hitting Nieuwenheis with the pitch — a mistake for a pitcher who had avoided them for so long.

Nevertheless, Greinke finishes with the sixth-longest scoreless streak of all-time:

Soon, the spotlight will turn back to Clayton Kershaw, who now has the longest active scoreless streak in baseball at 29 innings.

As we tip our hat to Greinke, here’s a final look at the wondrous run. 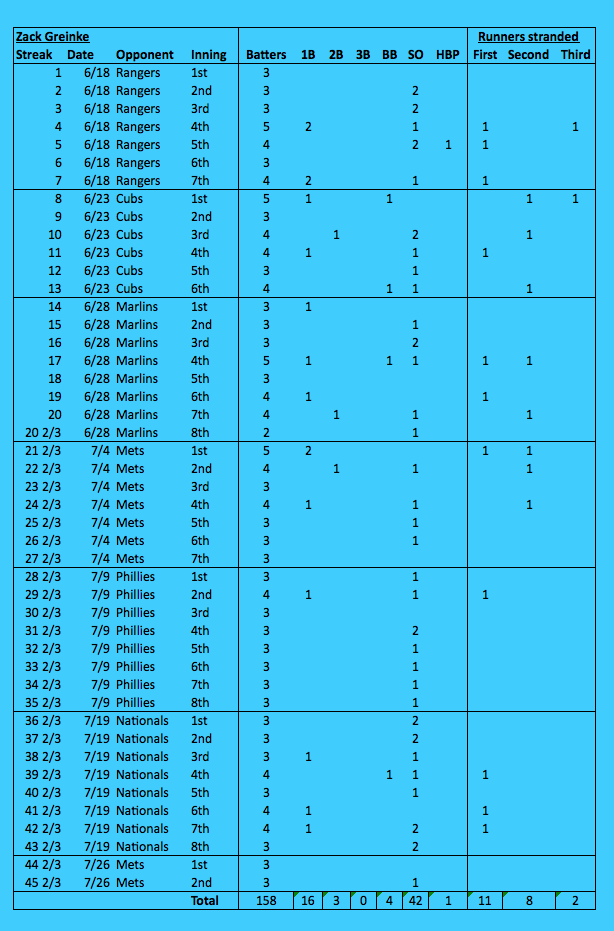 A second hit-by-pitch, this striking Michael Conforto with the bases loaded, led to a second run off Greinke, who finished his day with seven innings and a 1.37 ERA on the season.

Doubles by Adrian Gonzalez and Justin Turner and a single by Yasmani Grandal tied the game for the Dodgers in the ninth, but Juan Uribe — facing the Dodgers with his second team this week — drove in the game-winning run in the bottom of the 10th.

In case you missed it: On the off day