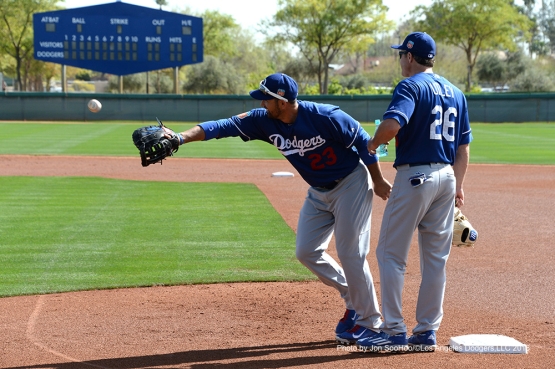 Adrian Gonzalez’s Cactus League debut has been delayed one more day, to allow him to make his first start in a home game.

“He wanted to be in there today,” Dave Roberts said, “but I just felt that as you come back from his neck, to drive 30 minutes and then have an hour or hour and a half off before you crank it back up to play a game, I’d rather take that extra day and err on the side of caution.”

“He’s not back on a normal program,” Roberts said. “We’re gonna get him throwing again, but we just want this thing to subside, the soreness that he has.”

The Dodgers still believe it realistic for Ryu to return in May, but when in May? That’s unclear.

Scott Kazmir is good to go for today’s game and scheduled to match Clayton Kershaw’s two innings from Thursday.

“The ball’s been coming out of his hand well,” Roberts said. “And a guy like Kaz, he knows what he needs to prepare. We just want him to have an up and down two innings, around 30-40 pitches, and that’d be a good day.”

With Kenta Maeda pitching Saturday’s game, Roberts said the Dodgers are likely to start Zach Lee in the slot that the injured Brett Anderson would have had.

“Right now, you’re looking at their days on, their days off, so that kind of limits us,” Roberts said. “So it was pretty easy in that sense that it just kind of lined up for Zach.”

Eric Stephen of True Blue L.A. deduced that Ross Stripling would piggy-back behind Lee, which Roberts did not deny.

With Anderson’s injury, Roberts was asked if newly signed Yaisel Sierra would re-enter the starter mix.

“That’s a conversation we had,” Roberts said. “With Sierra, I was asked what our role was for Sierra a few days ago, and if you look at our club that day, it was out of the pen — that was his chance. But he’s a guy who has length, and he’s got three pitches.”

Roberts said he envisions Sierra getting into Cactus League play, though he is behind other pitchers in his progression because of his late arrival.

A strong, stalwart gaze: Confidence and the Dodgers