Before Ethier went down, the Dodgers’ on-call quintet mostly was falling into place, with 1) A.J. Ellis as the reserve catcher, 2) Chase Utley as a backup at first, second and third base, 3) Scott Van Slyke and 4) Carl Crawford as righty-lefty outfielders (with Van Slyke also playing some first) and 5) Kiké Hernandez roaming the diamond, once Corey Seager returned from his knee hiccup to start at short.

The main riddle was the fate of Alex Guerrero, who can’t be sent to the minors without his permission. Ethier’s absence potentially opens up a spot for Guerrero, who did play some left field last season, though his top defensive position is third.

However, the Dodgers could still turn to a player who was previously destined for the minor leagues.

Trayce Thompson logically rocketed up the charts, given that he can play all three outfield spots. With Thompson, the question is how much he would start, and if he doesn’t start, whether you wouldn’t want him playing every day in Triple-A rather than languish in the big-league dugout. But at a bare minimum, Thompson would figure to get frequent late-inning defensive duty. Sprinkle in some pinch-hitting, double switches and spot starts, and you could probably make Thompson’s presence worth your while. 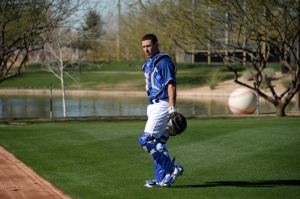 Another option is Austin Barnes. With plate discipline and pitch-framing skills, as well as the ability to play second or third in a pinch, Barnes was already a good choice, because he would provide the roster flexibility of a third catcher without the typical dead weight. That starting catcher Yasmani Grandal has had ongoing soreness in his arms enhances what Barnes’ value could be in April. As with Thompson, you’d just want to make sure there was enough playing time for the developing 26-year-old.

If there’s a leading non-roster contender, it might be Charlie Culberson, who by appearances this spring seems to be the best defensive shortstop available. Take any lingering concern with how Seager’s knee issue might affect his defense, and combine it with a desire for Hernandez to be as free as possible for the outfield, and you can make a case for Culberson to fill the 25th spot on the roster.

Culberson is perhaps more suited for a bench role than Thompson or Barnes, though it’s interesting to note that Culberson and Barnes are the same age. (Culberson, in fact, has the same exact April 10 birthday as Ethier, seven years later.) Another non-roster player, Rico Noel, has impressed with his speed and could conceivably fill the late-inning outfield role that might otherwise go to Thompson.

None of the aforementioned options are, like Ethier, left-handed hitters. To find one at Spring Training, you’d have to go to non-roster invitees Cody Bellinger (who was fantastic this month but is only 20 with Single-A experience) and 30-year-old Corey Brown. Both were sent to minor-league camp Monday.

Most important to keep in mind is that no decision is final. The Dodgers could rotate 25th men at a rapid pace all year, and don’t think they won’t. And of course, you’re just hoping there aren’t more injuries to complicate matters.

In case you missed it: Bolsinger won’t start opening week